Citroen is launching its line-up of DS cars in China at the Beijing motorshow, spearheaded by the attention-grabbing Numero 9 concept. Images and video here. 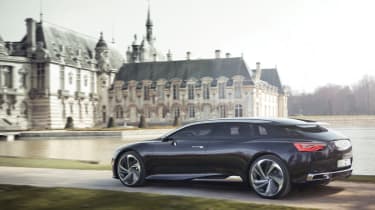 After the relative success of the DS models in Europe, Citroen will be launching the prestige sub-brand in China this year, and is be displaying the successful model line-up at the Beijing motor show.

The Numero 9 concept is a preview of what will become the range-topping DS9. It is fitted with a plug-in hybrid system, powered by a 225bhp version of the 1.6-litre THP engine that is used extensively throughout the Peugeot and Citroen model line-up.

Although the show car is exclusively petrol-powered, Citroen confirms that the hybrid drivetrain can be coupled to either petrol or diesel engines, dependent on the market. The motor produces 70bhp, and has a range of up to 30 miles running on battery power alone. For those times when you need every ounce of performance, the 'boost' function allows the driver to deploy the full 295bhp - taking the car from 0-62mph in just 5.4 seconds.

The combustion engine (petrol or diesel) drives the front wheels and the motor powers the rears, so in situations where grip is limited, the Numero 9 can use its limited four-wheel drive capability for added stability. When driven economically, Citroen claims that the concept is capable of 166mpg, and CO2 emissions as low as 39g/km.

Despite the fact the Numero 9 is a pure concept car, the sleek and low shooting-brake styling will heavily influence the style of the next big Citroen - and we really hope it looks this good.