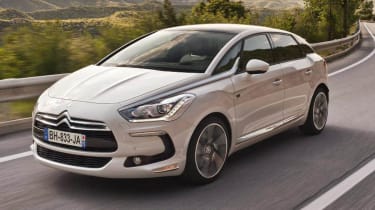 What is it? The Citroen DS5 is a dramatic-looking, high-style, upmarket hatchback with coupé overtones and some aluminium trim from the Welsh supplier that Aston Martin uses. This is the third car in Citroen's premium DS series, but what it oisn't What it is not, however, is a reskinned, reconfigured, repositioned C5 even though the DS3 and DS4 are derived from the C3 and C4 hatchbacks. That the DS5 is shorter than a C5 gives a clue: under the skin is a lengthened version of the C4/Peugeot 308/RCZ/3008 platform.  Technical highlights? That means the DS5 shares the more interesting powertrains among that car-cluster. There's a 161bhp, 2.0-litre turbodiesel with manual or automatic transmission, the same engine matched to a rear-wheel electric motor and a robotised paddleshift auto to create the DS5 Hybrid4 (200bhp in total, 99g/km), and two 1.6-litre turbo petrol engines of 153 (auto-only) and 197bhp.  The hybrid arrangement is identical to that of the 3008 Hybrid4, recently tested here. All transmissions are six-speed. So far, so good. Less promising in a car occupying a planned price ground between £22,000 and £30,000 is that all DS5s except the Hybrid4 use a torsion-beam rear axle. They can work well in smaller cars but might it be a bit marginal at this level? That the hybrid has a proper multi-link rear end, because it has to accommodate driveshafts, shows there is cost-cutting going on in the rest of the range.  What's it like to drive? It promises much. The styling, by British designer Andrew Cowell, is something genuinely new and different, with its bright-metal 'sabres' slashing along the tops of the front wings and into the windscreen pillars, the airflow-improving vents ahead of the front wheels, the deep flanks and the rear window cut far into the sloping roof, bisected by a spoiler. Those sabres can be in chrome, dark chrome or even darker chrome to choice. Inside, too, the DS5 is dramatic. At the dealer or on the net you can specify your DS5's colour and trim with the 'DS Attaché', a case full of samples. First driving impressions fulfil that promise. The THP 200 is likely to be the DS5 with the greatest evo appeal, and it accelerates away with the crisp, torquey enthusiasm typical of this engine. The gearchange is smooth, light and quick, the brakes are strong, the pedal layout and driving position are just right. Even the view aft is much better than the styling suggests it would be. Then you hit a bump. The thud and fidget and general stiff-leggedness are not would you should experience in a Citroen, nor indeed in any Peugeot-Citroen product. PSA was once the industry leader in creating cars able to combine incisive responses with a supple ride, and recent evidence (RCZ, 508) showed the art was returning. Not here, unfortunately, although the test car's excessive 19in wheels can't have helped. This is all wrong in a car with premium aspirations and intended to carry four, maybe five people. We could forgive this a little if the handling was super-sharp and addictively entertaining, but it isn't. It grips hard and steers quite accurately, but there's no sense of balancing inputs and tuning the line with the throttle. It just points and goes, capably but dispassionately. There's too much grip, actually, and not enough breathability. That's wrong for a Citroen, even one meant to feel, as this one is, 'dynamic'. The Hybrid4, also on 19in wheels, does feel more supple at the back thanks to its more sophisticated suspension. Adoption of this axle on all DS5s would make this a more credible range, but I fear it's too late.  How does it compare? Hard to know what to compare the DS5 with. A 3-series? The BMW is much the more invigorating and satisfying drive. An A4? The DS5 is more visually interesting but suffers from a version of the old Audi ride and handling malaise: maybe that was the intention, given the A4's popularity. A DS5 THP 200 on 17in wheels might be a much better car in every way than the car we tested, but it won't be in the price lists. Nothing in the class looks as dramatic as the Citroen, though, and that might be its salvation.  Anything else I need to know? There's not a lot of room in it for rear passengers. The deep boot pushes the rear seat forward to the detriment of leg- and foot-space, and the rear doors are uncommonly thick. At least the rear seats fold down properly, with flip-forward cushions. DS5. Lovely idea, intriguing looks, sophistication too shallow, in search of suspension. On UK sale next March.