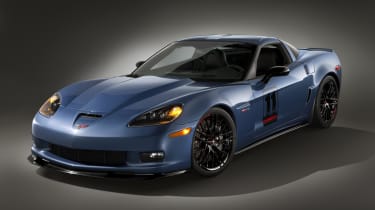 The next Corvette may be designed outside the USA for the first time ever.  According to Automotive News, GM’s vice president of global design Ed Welburn has asked for designs from ten of its design studios all over the world to pen the new ‘Vette. This marks a new era for the iconic coupe, which until now was exclusively a USA-bred animal.  The aim is to design a car to take chunks out of the European market - the Porsche 911’s stomping ground. The two cars, although looking quite different, are actually of a very similar size and performance.  However, don’t expect an engine over the rear axle and bug-eye headlights. The new Corvette will retain the same formula - intended to keep it authentic - but will feature an interior with better fit and finish than before. A good move, we think.  GM certainly needs to do something to drag the Corvette back into the limelight. According to a JD Power survey, the average buyer is now 54 years old and rising. The lack of younger clientele manifested itself in a 48 per cent decline in sales over 2009.

In other 'Vette news, a new Z06 Carbon edition (pictured) has been announced. It bridges the gap between the Corvette Z06 and Corvette ZR1 supercars, endowing the more accessible former with the chassis and some of the carbon skin from the latter. Just 500 will be made and you've the choice of Inferno Orange or this rather cool Supersonic Blue.