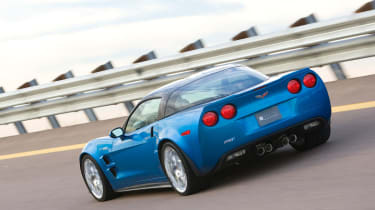 Ultimate has many forms. That’s what Corvette chassis engineer Alex MacDonald tells me as I comment upon how fluently the ZR1 soaks up a Michigan surface that has fought the battle with expanding winter ice and lost. But how is it that this ultimate Corvette, with 638bhp, 604lb ft and a likely £100,000 price tag when it goes on sale in the UK at the year’s end, feels so much more supple and civilised than the circuit-hungry Z06 version, despite being, I am promised, much more devastating on track?

Part of the price, numerically almost the same as the US price in dollars, which suggests an attractive profit margin, goes on the latest application of Delphi’s MagneRide system. That’s the key to the civil suspension, now with a greater ‘bandwidth’, the better to differentiate Touring and Sport modes while making both more adaptable. Of more immediate glamour, though, is what lies under the subtly bulgier bonnet.

A heat-, scratch- and UV-resistant polycarbonate window in the bulge reveals the aluminium top cover of a wide and low, air-to-liquid intercooler whose fluid is itself cooled by the frontmost of the Corvette’s three heat exchangers. Below is an Eaton supercharger whose two rotors each have four lobes rather than the usual three, and which are coated with enough low-friction polymer to make them an interference fit on initial assembly. Eaton’s bedding-in process then gives them the perfect airtight but frictionless co-existence, the better to deliver up to 0.72bar of boost.

Hefty supercharger, hefty outputs. Out on the road the ZR1 proves devastatingly torquey, with 90 per cent of the effort on tap from 2600 to 6000rpm, so it’s unfazed by a long, long first gear able to slingshot it past 60mph. Take it above 3000rpm with a well-opened throttle and you’ll hear the blatter of a now very free-breathing V8, exhaust bypass valves having opened. Throttle-off now and theatrical bangs and crackles mark the moment.

Should you find the space and the opportunity, the ZR1 will take you to 205mph, having passed 60mph in 3.4 seconds, 100mph in 7.0 and 186mph (300kph) in 32.6. There’s something of a Mercedes SLR McLaren about the way it does this, except that you’ll enjoy the build-up to it much more in the ZR1. Accurate, credibly weighted steering, a surprisingly slick-shifting manual transmission (by Tremec) and standard-fit Brembo carbon-ceramic brakes of proper feel and featherability are mainly why.

So this fastest-ever Corvette is also the best-mannered, best-riding and most civilised, but is it really worth over twice the cost of a regular Vette? That car has 430bhp, is claimed to pass 60mph in 4.1sec and level out at 190mph, which you’d think is probably musclepower enough. However, there’s the other ultimate to be explored, the one that the Bob Lutz-Ring is planned to reveal.

That’s the informal name for the new high-speed handling circuit at General Motors’ Milford Proving Ground, a short way out of Detroit. It contains several of the Corvette engineers’ favourite chassis-stretching racetrack bends, plus a re-make of the Nürburgring’s Karussell. With its sweeps, blind crests and heart-in-mouth tests of a driver’s 3D memory, the Lutz-Ring really is its German inspiration in pocket-size form.

Suspension is set to Sport, obviously. Traction and stability systems are set to ‘competitive mode’, allowing quite a lot of slither while keeping a loose safety net for the benefit of GM’s insurance. Brave pills are swallowed.

They’re not working yet. The first lap reveals the ZR1 to be far too much car for such a tight and tortuous track. How can I form any meaningful assessment when it’s all I can do to keep the Corvette on the asphalt while trying to memorise the snaking route? Lap two, and some of the braking gives way to mere lift-offs as speed and confidence rise. The car shrinks and the track grows.

A few laps later, it’s making sense. The lap begins with a fast drop to a long, tightening right-hander, requiring two separate brake-and-turn sequences before powering, still turning, up a hill towards a crest. This, I soon learn, is where the grip from the bespoke Michelin Pilot Sport 2 tyres is the most extraordinary.

There always seems to be more grip – at the front anyway. Even when you expect it to finally understeer because you’ve just asked for an impossible turning effort, the steering still bites and the front wheels find more purchase. As confidence grows you can lean amazingly hard on the Corvette, then as maximum g-force seems to approach you can apply more power and feel the tail drift out for a final flourish before the next twist.

Such confidence comes quickly in the ZR1, because it’s a very understandable car. And that’s because it’s responses are very precise, linear and progressive, so you know exactly where you are with it. If you mis-remember a crest and you’re heading for trouble on the far side, the ZR1 lets you sort it out in your own time. And then, as you enter another long, high-g bend, you can feel the Corvette pivoting about its front wheels as you meter the energy to the rears, holding the gentlest of drifts if you like because that’s what it naturally does. It’s the epitome of the well-balanced rear-wheel-drive car.

It’s massively fast on-track, of course, especially when Jim Mero, who designed the track, is driving. I like to think that fragments of my laps were slightly like his, but had I attempted that first downhill right-hander at Mero speed, I’d have ended up in Illinois.

Anyway, car clearly does fit track. Light weight helps its flick-flick-through-chicane agility, achieved by making the understructure (as in the Z06) a replica in aluminium of the standard Corvette’s steelwork. There’s carbonfibre too, notably for the bonnet, the front wings, the inner wheelarches, the aerodynamic addenda (no less discreet than they need to be) and, most obviously, the roof.

Back in 1989, as I reported for primordial evo in the guise of Performance Car, the only previous Corvette to bear the ZR1 name (then hyphenated as ZR-1) had a Lotus-developed engine with four overhead camshafts, 32 valves, 5.7 litres and 375bhp. This one, too, has an aluminium block and heads, but it keeps the original small-block Chevy architecture of pushrods and two valves per cylinder. Yet it makes 638bhp from 6.2 litres, and still revs to 7000rpm. Clever idea, the supercharger. Wonder if it will catch on?