The new Corvette C7 will be officially offered in the UK for the first time later this year. Is it good enough? Review and specs here 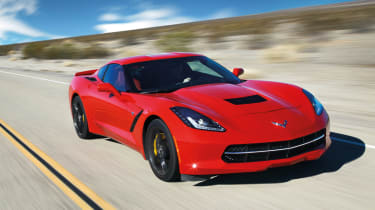 The seventh generation of America’s original sportscar, now reunited with the ‘Stingray’ name that graced some of its most famous predecessors. On paper, it looks like little has changed, with the ‘C7’ Corvette sticking with the tried-and-tested combination of a pushrod V8, a rear transaxle and (yes!) that infamous transverse leaf spring at the back.

But don’t write this Corvette off as some kind of dinosaur – it’s also packed with some serious tech, featuring an aluminium bodyshell, carbon bonnet and roof and a properly advanced multi-mode stability control system that includes an aggressive ‘Track’ mode.

Pricing is extremely competitive – at least, it is in the ‘States. Specified with the Z51 performance package the Stingray costs $53,800 in the US – just under £33,000 at current exchange rates. Don’t get too excited, though – when the car comes to the UK later this year the EU version will cost £61,645, and that’s with the steering wheel on the wrong side.

Much is familiar about the new Corvette, of course – not least the presence of a ‘small block’ V8 under the bonnet, which still operates its valves by pushrods. To the doubters, that will be taken as evidence of the new car’s lack of evolution over its predecessors. The truth is more complicated, and not least because Chevrolet argues the overhead valve powertrain enables a more compact engine and a lower bonnet line. The V8 also features both direct injection and selective cylinder shut-down to boost economy.

Our test car was fitted with both the Z51 performance pack and an optional sports exhaust, boosting output to a respectable 465bhp, with this accompanied by 464lb ft of torque. A seven-speed manual transaxle comes as standard, a six-speed torque converter auto is an option.

Underneath, this ‘Vette sticks with the familiar combination of double wishbones all round, with those at the rear sharing a single transversely mounted composite leaf spring. For all its notoriety, this doesn’t serve to locate the rear suspension, and allows the rear suspension to be packaged as low as possible. The rear transaxle gearbox enables Chevrolet to claim 50:50 front-to-rear static weight distribution.

This Corvette is also vastly more advanced than its predecessors in terms of electronic architecture, with standard switchable dampers and a multi-mode stability control system that features ‘sport’ and ‘track’ modes in addition to full deactivation. Cabin quality feels far higher than that of the last ‘C6’, with a TFT display screen in the dashboard reporting on revs and speed and a central touchscreen for audio and nav functions.

Impressively well – certainly on the Californian roads we put it through its paces on. Despite the promise implicit in the engine’s huge capacity it actually feels a but under-gunned at regular speeds – maybe because we’ve got so used to the combination of turbocharged low-down torque and quick-reacting automated gearboxes. The V8 is happy to trundle at low revs, but it doesn’t start to deliver until there’s at least 3000rpm showing – and really comes on song between about 4500rpm to its 6500rpm redline. Throttle response is excellent, though.

It takes a while to get used to the gearbox, which is addressed via a heavy clutch with a relatively sudden biting point. The gearshift has a short throw and a slightly artificial-feeling weight to it – and unlike the new Porsche 911 there isn’t an inhibitor when you change up from fourth to guide you into fifth rather than seventh – meaning that it’s irritatingly easy to snag the wrong gear. And as sixth shows less than 2000rpm at an 80mph motorway cruise it’s not altogether obvious what seventh is actually for, the US being noticeably short of Autobahns.

The suspension is surprisingly compliant given the Corvette’s dynamic intent, certainly with the adaptive dampers in their softest mode. The steering takes a bit longer to get used to. It uses electrical assistance, but feels far closer to an old-fashioned hydraulic system than most similar systems. The rack is quick, but the assistance weighting is light and you need to build up confidence. Once you do, you’ll find some workable feedback there, although the vast level of grip generated by the front Michelin Pilot Super Sports means you’ll always be carrying serious speed before finding the limits approaching.

If anything, the Corvette feels over-tyred at first – an impression that’s increased by the engine’s relative lack of low-down torque. In anything above second gear you have to be wringing the engine out to feel the torque having any influence on the back end, and when the rear tyres do run out of grip you suspect the transition will be a sudden one. The other side of the equation is that – with the stability control doing its thing – you quickly gain confidence in the Stingray’s towering adhesion. On lower grip surfaces switching the traction control off reveals a neutral handling balance and an easy low-speed driftability.

All recent Covettes have delivered thrills – sometimes of the time-to-change-your-underpants variety. But the C7 adds a welcome dose of maturity to the mix.

In America, extremely well – the basic Stingray is $30,000 less than an entry-level Porsche 911, and with a better power-to-weight ratio. But in Europe that towering pricetag will almost certainly ensure the ‘Vette remains of minority interest.

The C7’s interior quality is vastly better than that of any of its predecessors. Materials quality might not be quite on a par with upmarket rivals, but it’s well-finished and feels far more durable than its made-from-Styrofoam ancestors. Apart from some booming acoustics, it cruises extremely well – and we managed 25mpg (imperial) for 400 miles of mixed use. 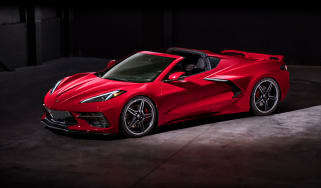