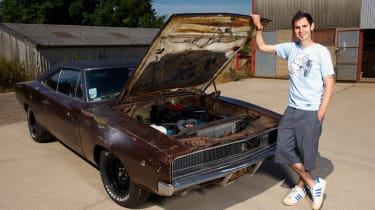 The first question is always about mpg and the second is ‘what colour are you going to respray it?’ The one thing you don’t talk about with old American iron is economy.I reckon I’ve got 20mpg at 60mph, but that’s not the point. Paint-wise, as far as I’m concerned she’s finished. I wet-flat it here and there over a beer sometimes, but nothing more.

This car is the culmination of eBay, a weak dollar rate and watching Bullitt way too many times. To my eyes the ’68 Charger is the pinnacle of muscle car design: the vacuum-operated headlamp doors, the fang-like bumper overriders, the sharp elongated rear roof pillars and bowing wheelarches that make grown men exhale and nod.

It makes a Mustang look like an Italian man with plucked eyebrows. The Charger may have the obligatory Coke-bottle haunches and a ‘Boar grain’ vinyl roof, but it’s nasty, menacing. As with Lancia Integrales, women predominantly hate them. Mine was my wedding car – albeit static display wedding car – trailered straight from the docks to the ceremony.

I’ve owned several yank tanks since I was 20, but the Charger was always out of reach. I’d been quietly sniffing around for something honest and weathered for a few years. When the pound was proud against the dollar in May 2008, I chased down and personally imported this faded, reasonably rotten example.

What made this car stand out was that it wasn’t a top spec R/T or Hemi model. Neither had it been tarted up with filler and turned into a General Lee replica. It had started life in Bullitt territory – San Francisco – and spent several decades half under a car-port, slowly decaying. The history is patchy, but I bought it from an old bloke in San Diego called Ozzie, there are bullet holes in the boot lid – shot from the inside – and it’s covered only 31,000 miles from new.

Just 259 Chargers were made in this configuration for ’68: 383 cubic inch (6276cc) 330hp big-block V8, four-on-the-floor Hurst manual transmission, non-servo drum brakes, no power steering, no air con. Real bare-bones stuff. Read into that what you will, but it felt like I was buying some kind of retired moonshine runner’s wheels.

The original light green paint peers through in various places beneath the god-awful old hillbilly respray. It was this patina that drew me to the car. That, coupled with the fact that it is ‘numbers matching’ – American muscle-geek lingo for a car whose original factory engine, transmission and axle stamps all tally with the VIN.

In ’60s monocoque Mopar terms, my car wasn’t that rotten, but it still needed nine months of labour and a new boot floor, rear valance and lower quarter panels. The repaired areas were painted and faded back to match. There’s no filler, just 10 litres of cavity wax to keep the steel cancer at bay.

I bought my Charger to charge about in and savour the most basic V8 driving experience. No radio, no sound-proofing and a 2ft gear shifter. The brakes make you think hard, and press hard. The huge unassisted bakelite steering wheel is only a bind in car parks. On the road it communicates more feeling than any American classic I’ve driven. Drag racers swear by manual steering.

The torsion-bar front and leaf rear suspension are replacement heavy-duty R/T-spec parts. It is nowhere near as corner-shy as I’d expected, and, coupled with a manual ’box that was built for vigorous cog swapping, the sensation never disappoints.

By Monaro or Corvette standards it isn’t quick on paper any more, but, being devoid of any technology or luxury, it feels addictively raw. If I painted it, I’d have to restore every nut, washer and square inch of chrome. Then it’d feel too sacred to drive. This is the most expensive car I’ve ever owned, so it needs to earn its keep. Mothballing simply isn’t an option…