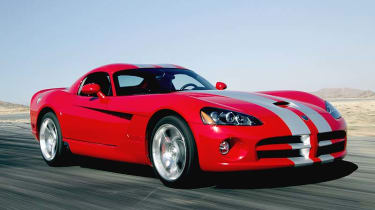 For Americans, bigger is always better. Europeans generally understand that a dirty great engine pumping out sufficient power to light a small town doesn't necessarily make a good sports car. But not our friends from over the Atlantic, hence the 8.3-litre Dodge Viper (or SRT10 as we Brits must call it following a row over the rights to the Viper name).

Just as they go their own way size-wise, the Yanks also have a singularly unpredictable way of designing cars. While most makers build a coupe first, then think about removing its roof, Dodge (a Chrysler-owned company) built a convertible then had to figure out how to turn it into a hard-top. Not surprisingly, the engineers from SRT - Street and Racing Technology, Chrysler's sporting subsidiary - reckon they've made the new coupe 30 per cent stiffer than the soft-top, and all for a modest weight increase of 19kg. By adding a spoiler in the shape of the kicked-up boot-lid along with a diffuser underneath, they've also found a third more downforce.

Amazingly, the SRT10 is shorter and narrower than any current Ferrari. It just looks bigger because its designers clearly don't understand the word 'svelte'. In fact the chunky looks are belied by your first impressions at the wheel. The steering, for example, feels quick and positive - even if it is separated from the driver by 8.3 litres of Detroit's finest. Sitting virtually over the rear wheels helps you feel what the car is doing... which is never dull. For while the front stays pinned to the road, the rear squirms around, defying you to prod the throttle hard and take off into oblivion.

Yet somehow the SRT10 manages to hold it all together. It certainly isn't down to electronic interference. There's no ESP, no traction control and it only has ABS because, according to Dodge, it makes the thing faster round a track and so fits in with the SRT ethos. Yet once you've got the feel of the surprisingly responsive accelerator pedal you realise it's actually rather a playful beast and fishtailing away from standstill is something to look forward to - until you get the bill for the enormous 345/30x19in rear tyres.

You also become accustomed to a ride that smothers bumps despite the clod-hopping footprint of those massive tyres. Although I was driving it on smooth US roads and the Great British Pothole might be another thing altogether, the extra rigidity over the convertible is noticeable and much appreciated. Over here, the convertible shakes, shudders and shimmies, so the slight increase in kerb weight to 1565kg seems a good trade. Even so, Dodge has plans to put it on a diet.

The engine, however, is a bit of an acquired taste. This isn't a car to drive with a headache unless you want your temples to explode. The V10 rumble reverberates throughout the body and sounds so, well, lorry-like at low revs that you'll be chasing the 5600rpm redline; the frustration is that 90 per cent of the V10's 525lb ft torque peak is available at just 1500rpm...

The six-speed gearbox takes time to get used to. It's not the most precise shift in the world and although I never did manage to hook second when changing up to fourth, the thought was never far from my mind as I let the clutch out. Speaking of which, despite being electrically adjustable, the clutch pedal has an enormous amount of travel with a biting point that's right at the top, making repeated shifting a tiresome process.

But the really big downer is the interior. Dodge might have put a fixed roof on it and gone as far as incorporating a double bubble to accommodate helmets for trackdays but otherwise the cabin has all the charisma of a delivery van. Having the exhausts running through the sills will doubtless entertain the sadistic as passengers endeavour to get in without cooking their calves, but there's little else to cheer you unless you get off on black plastic. Even the red starter button is almost hidden by the steering wheel. Thankfully Chrysler/Dodge bosses know the car needs a better interior and they've got plans for upgrading it at some point in the near future with more 'metal effect' trimmings.

They remain confident that this latest version of the SRT10 will hit the spot with enthusiasts. And they've got a point. Yes, it is noisy. And in many ways it's as uncouth as a gang of teenage boys leering at a top-shelf magazine. But for the money there's an awful lot of performance on offer. And whether you appreciate it or not, no-one can deny the SRT10 has character, and lots of it.