Drag strip optimised Challenger can do the 1/4 mile in 9.65 seconds 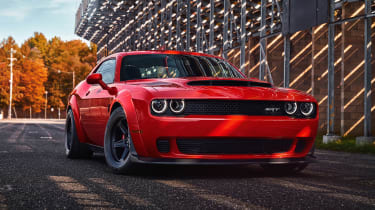 Dodge has finally revealed the insane Dodge Challenger SRT Demon; a drag strip-orientated, yet still road-legal 828bhp monster. Dodge haven’t been subtle about its talents over an exhausting teaser campaign, but now we can see the car in full, it boasts some pretty impressive figures, including some never attached to a road car before.

At the Demon’s core is the engine, a further upgrade on the already slightly mad Hellcat’s supercharged V8. Sharing the same 6166cc displacement, the Demon has a 2.7-litre supercharger running at a maximum boost pressure of 14.5psi to produce that incredible power figure of 828bhp. Torque is also huge at 770lb ft, giving Dodge the title of worlds most powerful production V8.

The Demon will also come with a separate power train module that will allow the engine to run on 100 plus octane fuel. A button within the vehicle will allow the driver to switch to an engine map that has been allows it to run on the race fuel. 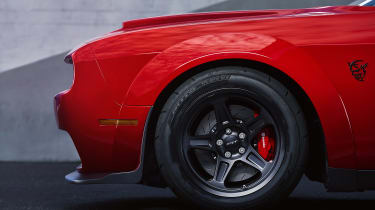 The Demon is designed for racing, drag racing that is. Everything in the car, and what’s been left out, is designed to help improve its quarter mile times. Firstly, the supercharger is preloaded and to increase power at lower revs and the Demon’s launch control is operated via the paddles rather than the brake pedal to reduce reaction times.

It also uses Bilstein adaptive suspension tuned specifically to maximize weight transfer to the rear wheels to improve traction without sacrificing lateral stability. The propshaft and differential housing has been uprated over the item in the Hellcat to deal with more torque and the increased stresses of the new viscious launch procedure.

Dodge has revealed that the Demon will be 97.5kg lighter than the Challenger Hellcat, suggesting a total weight of 1795kg. To remove such a significant amount of weight Dodge has removed all the seats, except the one for the one used by the driver; Dodge has taken weight reduction very seriously. Binning the rear bench has saved 25kg while removing the passenger seat has saved a further 26.3kg.

Inside the Demon only has two speakers, a manual adjustable steering wheel and far less sound deadening than other Challengers. The extents to remove weight have found their way to the car’s chassis and brakes, too. However, these changes don’t sound quite as appealing.

The Hellcat’s six-piston front brakes have been replaced with four-piston calipers and smaller discs. And the anti-roll bars, although hollow, are also smaller in diameter. Hopefully the car’s reduced weight means it doesn’t need such impressive brakes and chassis control.

In total Dodge has removed 105kg of extra weight, but the Demon’s extreme diet has been offset slightly by the car’s wider body. The third teaser video, simply called Body, shows the Demon performing a burn out before a shot of the back of the car exposes its new bolted-on arches. 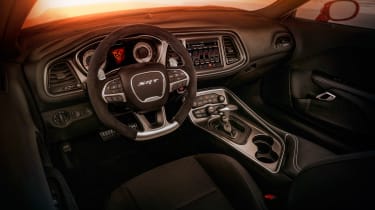 The new flares add 3.5-inches to the width of the Challenger and cover its 18 x 11-inch wide wheels. The Demon’s wheels are 2 inches smaller in diameter than the Hellcats, but are then 2.5 inches wider. The new car uses the same 315/40 18 Nitto NT05R drag tyres on both the front and rear axles, and is the first production car to come with radial drag tyres as standard.

The culmination of these changes are a set of pretty insane numbers; the Demon will do the quarter mile in 9.65 seconds at 140mph, will hit 60mph in 2.3 seconds and also boasts the Guinness World Record for the longest wheelie in a production car at 2.92 feet.

Dodge will be building a total of 3000 cars for the U.S market, with a further 300 for the Canadians, and prices have yet to be announced, but we'd bet they won't have any issues selling every single one of them. 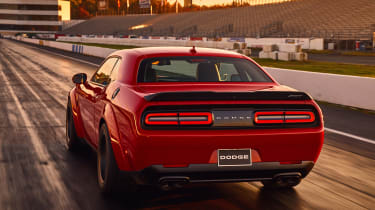 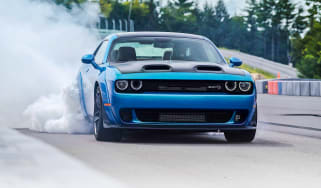