The Dodge Challenger SRT Hellcat is the most powerful production muscle car ever. Details here 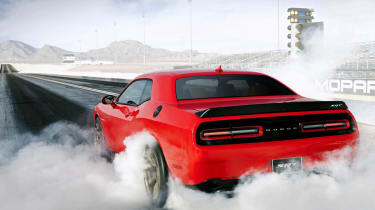 Dodge has shocked the muscle car world by confirming its fastest Challenger, the SRT Hellcat, will produce a stonking 707bhp from its supercharged 6.2-litre HEMI V8. With almost 300bhp more than Ford's fastest Mustang – which has a mere 420bhp on tap – the SRT Hellcat is the most powerful production muscle car ever.

Handling all that extra power is a new TorqueFlite eight-speed automatic gearbox, which is essentially an upgraded version of the transmission found in less powerful Challengers. Power is sent directly to the rear wheels of the hefty brute, the front-mounted engine meaning the Challenger stays true to traditional muscle car philosophy.

Dodge offers two keys with the SRT Hellcat, a red one that unlocks the full 707bhp potential from the big block V8, and a black one that restricts power to 500bhp. Inside, the interior has been heavily inspired by the iconic 1971 Challenger, whilst the chassis has been re-engineered to ensure the V8's power is maximised.

Prices are to be announced in the coming weeks, though UK buyers will almost certainly pay far more to source one from across the pond, with no talk of any official imports. Deliveries of the Dodge Challenger SRT Hellcat will start in autumn 2014.