It may not look it, but the EB110 might just be one of the all-time great supercars 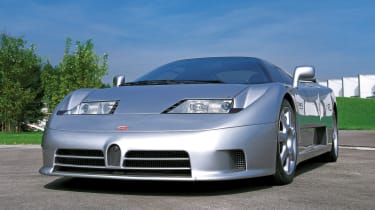 As the Veyron Super Sport does now, so in the early ’90s the EB110 held the accolade of The World’s Fastest Production Car. It was short-lived. The McLaren F1 arrived soon after and didn’t so much move the supercar goalposts as uproot them and replant them, well, somewhere almost out of sight.

Such is life, but the EB110 – named to celebrate the 110th anniversary of Ettore Bugatti’s birth – should be remembered for more than its brief spell at the top. It was very good – maybe too much so for its own good.

Like the Veyron, there was a ‘hot’ version, also named Super Sport. Introduced in March ’92, six months after the launch of the EB110 GT, it was faster, lighter and sportier. It retained the GT’s four-wheel drive but swapped some aluminium panels for carbonfibre, and was powered by a more potent version of the quad-cam, 60-valve, quad-turbo 3.5-litre V12. With bigger injectors, an exhaust system with two fewer catalysts and a new ECU, power rose from 550bhp to 603bhp.

When evo’s John Barker drove a pristine example back in 2005, he wrote of the exceptionally smooth mapping of its fiery V12 and the finely judged ride and handling compromise. He called it ‘befuddlingly, remarkably, outstandingly good’, and after half an hour behind the wheel, couldn’t help wondering why the EB110 wasn’t generally regarded as one of the world’s finest cars.

It was the first production car with a carbonfibre superstructure and generally overengineered to a faintly absurd degree. But, for an Italian supercar, the EB110 was surprisingly lacking in passion. It was very quick but, being so competent, so refined, so easy to drive and so conservatively styled, it didn’t stir the emotions like a Diablo or 512TR. The EB110 really was the supercar that was too good.