Conceived as a modern Cobra, the Viper and its coupe sibling were suitably brutal 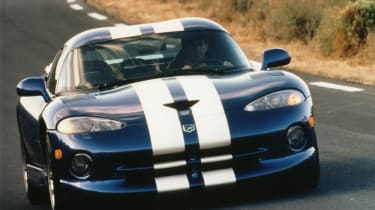 Chrysler may not have much of a name among fast cars fans, especially in Europe, but back in the late ’80s Bob Lutz, one of the great enthusiasts of the motor industry, was its president, and it was Lutz who suggested that the Dodge division should consider making a modern-day Cobra.

The resulting Viper convertible was powered by an 8-litre V10 lifted from a truck (but fettled by Lamborghini) and it looked, well, every inch as venomous as its name. America took it to its bosom, only to discover it really did bite, as one high-profile customer – Kelsey Grammer of ‘Frasier’ fame – discovered when he rolled his.

The Viper didn’t make it across the Pond until 1996, and we were a little slower to warm to its charms. Truth was, the RT/10 was tail-snappy and had a tent-pole roof that, when removed from the car, looked like a crashed hang-glider. April 1997 saw the launch of the more desirable GTS coupe version (now wearing a Chrysler badge) and this was much more like it.

Seach for a Chrysler Vipers on evo Cars for Sale

Even better looking, it ran a lighter and modified V10 and had some aluminium suspension components. Still not the last word in handling finesse, it was a far better resolved car than the roadster and went on to spawn the rather excellent GTS-R Le Mans replicas in 1998.

Some loved the raw, earthy honesty of it all, others felt the Viper crude and uncouth. In 2003, it evolved into the SRT-10, which was more like a Corvette tribute act than the wild and, with a degree of rose-tinted hindsight, rather wonderful original. After production ended in 2010 it looked like that was the end of the story, but Chrysler has revealed a new Viper for 2013, with power up to 640bhp from an 8.4-litre V10. Whether it can recapture the feelings of awe inspired by the original, we’ll have to wait and see.