The clock is ticking for the start of the 2014 Le Mans 24 Hours, and major technical changes this season will make the classic endurance race more of a challenge than ever 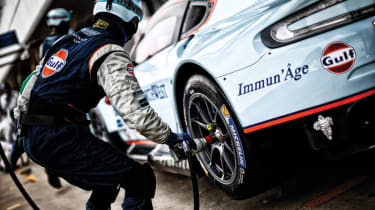 Please note: other 24-hour motorsport events are available. But none has the same mystique, drama, romance and heritage as that of the world’s oldest endurance motorsport event, the legendary French classic, the 24 Heures du Mans.

This year’s race has the potential to be a real thriller. Major technical changes for the premier LMP1H category for factory teams are placing the emphasis on fuel efficiency rather than outright power and performance; as a consequence it’s harder than ever to predict which of the three major players, Audi, Toyota and, as of this season, Porsche, is likely to walk away with the silverware.

Whichever team does emerge victorious, it will do so on Michelin race tyres. Competitors in the World Endurance Championship, of which Le Mans represents just one of the rounds, albeit a glamorous one, have free choice when it comes to a tyre supplier: Porsche, Toyota and Audi have all chosen Michelin as their trusted partner for this most demanding of racing championships. In part, this is because of the mass of experience that has accrued at the Clermont-Ferrand-based specialist since it first provided tyres for the inaugural Le Mans 24 Hours in 1923, and also because of the quality and depth of the working relationship Michelin enjoys with its partners.

To understand why developing race tyres for the 2014 edition of Le Mans has been such an exciting and involving challenge for Michelin, you first need a brief overview of what technical changes have been instigated by the race organiser, the Automobile Club de l’Ouest. The Club’s aim is for the technological advances in endurance motorsport to echo what’s happening in the automotive world as a whole – in other words, a fresh focus on efficiency, so that the environmentally concerned driver on the street is better able to see a link with what’s happening on the track.

Hence in the LMP1 category, all major manufacturers’ teams must field hybrid race cars – which is why the classification is now called LMP1H. Both Audi and Toyota were already running hybrids last season: Porsche joins them for 2014. This year, though, the stipulation is that they must use 25 per cent less fuel. That’s a tough call.

But to help, the regulations have dispensed with previous restrictions covering internal combustion engine design, giving engineers free rein to create whatever they want, diesel and petrol, naturally aspirated and turbocharged, as long as it meets efficiency rules. At the same time, there’s also greater freedom for the design of hybrid systems and their associated energy recovery systems – they can now be more powerful and drive all four wheels.

This is a huge simplification of an immense technical undertaking. During the 24 hours of the Le Mans race, each car will be given a ‘fuel energy allocation’ per lap, differing slightly depending on whether the internal combustion element is fuelled by petrol or diesel.

Also contained within a car’s energy allocation is the amount of energy ‘recovered’ by the overall hybrid system to be used for propulsion. Race stewards will monitor every car’s on-board systems each lap to ensure fuel consumption and power generation stay within the prescribed limits.

In order to achieve the new fuel economy, the 2014 regulations are tailored to give valuable assistance. For instance, the cars’ minimum weight has been reduced, although having to incorporate more powerful yet heavier hybrid systems will doubtless have required long hours of development by the teams’ engineers. Overall body width is down by 10cm to reduce frontal area, thus improving aerodynamic performance.

And, critically for Michelin, tyre width is reduced by 15 per cent – almost 5cm. Narrower tyres cut aerodynamic drag, lower rolling resistance and are lighter, too. But what does that mean for grip and performance? ‘It’s not easy with less rubber on the track,’ says Pascal Couasnon, Director, Michelin Motorsport. ‘The secret is the right balance. The engineer can play about with the material, the architecture, the angles of ply we are going to use, and the shape of the tyre – on the sidewalls it’s round, but across the tread it’s more or less flat. This triangle between material, architecture and shape is what’s going to get the maximum performance out of the car.’

Tyre life is absolutely critical, too, explains Pascal. ‘A tyre change is about 20 seconds, so here we have to try to come up with a tyre that’s very quick, very consistent, and which can cover the most kilometres possible. That’s the perfect combination.’

Unlike F1, there are fewer pit stop team members and only one airgun to change all four wheels after a fill-up or possible mechanical intervention. As a result the pit stops may be longer. So it’s crucial to preserve the life of the tyre over several stints. At Le Mans it is well known you can win the race in the pits, but you can also lose it there too. Of course, supplying all three contenders for outright victory at this year’s Le Mans 24-hour race, as well as many other competitors in other classes, might elicit suggestions of a conflict of interests, but because of the way Michelin nurtures the relationship with its partners, each team has a dedicated group of tyre engineers working intimately with them.

Furthermore, every team is invited to test the tyre versions developed with the other teams and each is then given the opportunity to choose whichever suits them best.

Lessons learned by Michelin in the punishing environment of the Le Mans 24 Hours – how to maintain high levels of grip and predictable handling characteristics for lap after manic lap, hour upon gruelling hour – inevitably feed back into the Michelin road tyres you can buy for your own car.

And what of the prospects for this year’s Le Mans 24 Hours? The only certainty is that with the changes to the regulations, it really could be anyone’s race…