The BMW gets a spruce up - My evo Year: Dion Price week 3

After the trip to Le Mans, and the M5's family duties taking their toll, Dion investigates getting the car's paintwork back up to scratch 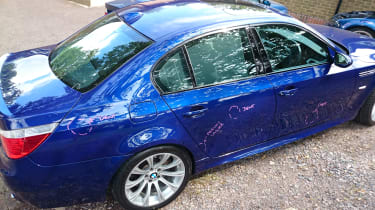 As well looked after as the M5 is, it is nearly nine years old and as such is no longer in showroom condition. Despite the low mileage of just 40k, it has picked up the odd nick along the way, mainly due to the fact that the car’s primary function is as a family vehicle.

My wife drives it 80 per cent of the time as, more often than not, I am shoehorned into a standing-room-only First Great Western carriage as my main conveyance to work and back, all for the bargain price of £35 per day.

As such, the car parks of the nursery, local supermarket, various leisure centres and village halls have taken their toll on the car, which now has a handful of blemishes left by those who simply don’t give one iota of consideration to some of Bavaria’s finest metal.

Now, the E60 is a tough old bird. The high-strength sheet metal is anywhere between 1 and 1.8mm thick, making it resistant to some pretty wince-inducing knocks from other car doors without leaving a blemish. With this in mind it is slightly infuriating to come across a new major ding on the car that must have been created with a force that probably would have caved in a famously flimsy Renault 5 Turbo panel. Grr.

Anyway, prompted by an email from evo asking if I am free to bring the car along to a gathering for a feature for the 200th issue of the mag, I decided some TLC was long overdue.

Cries from my wife of ‘It’s a waste of money – the car is perfect’ fell on deaf ears as Google furnished me with the answers I required. Two companies stood out as potential candidates for completing the task, albeit in different ways.

AutoRestore is owned by massive conglomerate Belron, of Autoglass fame. Its approach is to bring a mobile bodyshop to your house and cocoon the car while essentially respraying the entire offending panel. Given that the small number of stonechips and areas of minor lacquer peel were irritatingly evenly spaced around the car, it became clear that the AutoRestore approach was not best suited to this job, as half the car would end up being resprayed.

Up next was Revive, one of the country’s leading ‘smart’ (Small to Medium Area Repair Techinques) firms. Extensive research on smart repair leads you to one conclusion: the quality of the finished job varies hugely based on the technician that comes to do the job. An email to Revive explaining what I was looking for – i.e. nothing less than perfect – drew a quick response and the naming of one of the company’s very best guys to carry out the work.

Photos of the damage were taken and sent off for evaluation, and it’s now a waiting game as the repair has been booked in for a few weeks’ time. With any luck, the car should be back to its very best in time for the Silverstone F1 GP.

In the meantime, the Goodwood Festival of Speed is looming. It’s always a fantastic event that usually throws up a few surprises. This year, a few teaser shots from Aston Martin and Michelin have hinted at some pretty special metal going up the hill. Personally, I can’t wait!