Dion takes a family trip to the Goodwood Festival of Speed, where the mighty Koenigsegg One:1 makes a lasting impression. 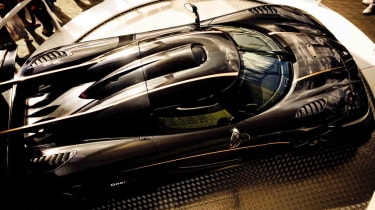 A few weeks after the trip to Le Mans, a much shorter road trip down to the South Downs beckons as once again Lord March opens up the glorious Goodwood estate to the hoi polloi and motoring royalty alike.

Goodwood is a real highlight of the motoring calendar for several reasons, but one that is often overlooked is that if you travel early and chose an appropriate route, it is actually a cracking little cross-country drive.

Weighing in at 1755kg, the E60 BMW M5 is never going to be the de facto weapon of choice for an early morning B-road blast, but a quick tweak of the M-mode settings to slacken off the ferocity of the gearchanges and tighten up the steering and suspension, and the car shrinks around the driver.

Of course, the laws of physics dictate that the M5 doesn’t magically turn into a 205 GTI, but on its set of freshly installed Michelin Pilot Super Sports it produces grip levels that see even the most overly optimistic corner entry speeds gathered up without so much of a chirp of protest.

The impressive new rubber delivers a great drive through some glorious British countryside. The journey draws just the right mix of squeals of delight from the kids and squeals of protest from the wife. Swift, entertaining progress in comfort and style – the M5’s strong suit.

Entering Goodwood at the foot of the hill climb course you are immediately surprised by the proximity in which you find yourself to the course, the cars and the drivers. Chris Evans, Allan McNish, Sir Chris Hoy and Lewis Hamilton are all spotted within 20 minutes of our arrival and so it goes on, celebrity spotting all day, including some ‘selfies’ with the likes of Jake Humphrey and Ben Collins (AKA Stig no. 2).

Wandering around the grounds that straddle the hill climb course you can get up close and personal with every petrolhead’s bucket list of cars to see in the flesh. Countless classics, modern icons and concept cars are on display with only one or two actually being roped off from sticky fingers and scratch-inducing paraphernalia such as buggies, rucksacks and wide-angle lenses. The Michelin Supercar Paddock held more than 40 of the most exciting modern supercars, some of which were also used for the Michelin Supercar Runs up the hill. I can’t think of anywhere else in the world where you can see such a breadth and depth of automotive hardware up close in one sitting.

As my vehicular church is a house of many religions, my favourite cars of the show span many marques, formats and eras. It’s the cars that I haven’t seen in the metal before that really strike a chord this time round, however. The one-off Ferrari F12 TRS is just achingly beautiful, especially when in motion. At $4.5m it makes Jay Kay’s Kermit green £1m LaFerrari sound like a bit of a snip.

Over at the Concours d'Elegance, the stunning 1953 Maserati A6GCS Berlinetta is crowned overall winner by a comedic mix of Jonathan Ive, Rowan Atkinson and Sally Gunnell. Now there’s a dinner party!

My heart, however, lies with the TVR Cerbera Speed 12, the truly bonkers machine that never really was. Having waited years to see one it doesn’t disappoint. The fact that TVR boss (and racing driver) Peter Wheeler cancelled its production due to the fact that he felt it was simply too powerful for the road only adds to its mystique. I believe only one made it into public hands and given that it has around 1000bhp and weighs approximately 1000kg, I am amazed it survives any public journey at all with zero driver aids to rein it all in.

Similarly, another favourite from the show is the newly announced Koenigsegg One:1 on the Michelin stand. In an unlikely link to the Speed 12, it picks up the ‘dream equation’ of having a 1:1 ratio of power (in PS) to kerb weight (in kilograms). The car produces 1341bhp (1360 PS) to sling its 1360kg of mass forward, topping the Speed 12’s roughly 1000bhp to 1000kg benchmark. To help this monster get the power down, it’s fitted with a set of the road-legal, track-biased Michelin Pilot Sport Cup 2 tyres.

Clearly, in the 18 years since the Speed 12, both the technology to defy the laws of physics and the stark lunacy of small car firm CEOs have changed for the better, meaning that the One:1 will indeed be produced, albeit for just six lucky owners worldwide.

There are so many other cars of note on the hill, in the Michelin Supercar Paddock and on the rally stage that I can’t even count them all. If you haven’t been, you simply have to go and experience the event for yourself to get your head around it. Sebastien Loeb, at the wheel of a Peugeot 208 T16 Pikes Peak car, was going for the hill record this year too – which required a special set of super sticky Michelin tyres, developed especially for the hillclimb’s unique challenges.

The Festival of Speed truly is a family affair, too, having no hint of a ‘car nerd-fest’ aura compared with other open-air shows and gatherings. From the giant two-storey slide at the Ford stand to SEAT’s mountain-bike course and Citroën’s trampolines, there are lots of things to keep the kids happy. However, the family highlight this year had to be the mad-scientist demonstration at the impressive Michelin stand, where trained actors playing the part of ‘lab technicians’ infused a ton of kid-friendly fun into some tyre science, all coated with a healthy dose of pops, bangs, fizzes and flashes to keep them oooh-ing and ahhh-ing. Great fun.