Dion has bought another BMW to add to the fleet, this time it's a rare white Z4M Coupe. 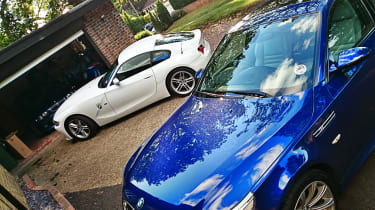 Ever since a family friend turned up at my parents’ house in a gleaming Zinnarot Red E30 325i in the early 1990s, I have had a thing for BMWs. The parental figures were always Jag and Volvo fans and despite them usually going for the faster variants, I was left wanting something a little more exotic when I moved onto four road-legal wheels.

Well, exotic yet obtainable: an oxymoron perhaps but something that the BMW M back catalogue covers better than most brands.

In my 20s I foolishly passed up an E30 M3 Cecotto limited edition for pretty much pocket money. Over a decade later I didn’t feel comfortable stretching to £25k to buy an M3 CSL at the time and today of course, I deeply regret that decision too. Assuming I would have resisted putting Starship Enterprise mileage on these cars, the Cecotto would have comfortably been worth five times its then-sticker price and the CSL would be knocking on almost double its purchase price just a few years ago.

Certain M-car financial sweet spots have become easier to spot over time, the Z8, 1M and M3 GTS being recent examples of ‘bet the farm’ investments. There is a layer below top M-car exotica, however, that with the right mix of options and a longer-term ownership view should be a fair bet also. With emissions and safety regulations neutering the historical wild side of BMW car development these days, we can safely assume that there are a fair few M-cars that we will never see the likes of again. When car manufacturers start ‘piping’ artificial exhaust and engine sounds into the cabin via the stereo system, you know something is not quite right in the vehicle character department.

One of the very reasons that I went for the V10 M5 is that it is slightly bonkers. Power is one thing but character of delivery is quite another: maximum attack gear changes that feel like a shovel to the back of the head, brute force overtaking, and a fuel tank range that makes a Nissan Leaf almost smug. All of these things derive a unique character.

So, as a long-term seeker of characterful modern-ish M-cars, I have always had a hankering for the famous M Coupe. The original Z3 variant is something special but having owned an E46 M3 for over a decade now, the prospect of that engine in the swoopy Z4 Coupe shell is a tantalising prospect.

The beauty of the Z4M Coupe is however, in my eyes at least, highly sensitive to its colour. Darker colours feel a bit drab somehow and silver is a bit too pedestrian. Despite it dividing opinion, a Z4M Coupe in Alpine White makes a lovely thing simply beautiful.

The slight snag with wanting a white Z4M Coupe, however, is that there were only 18 ever made in right-hand drive. Assuming a few of those have gone the way of the dodo over the years, let’s work on the basis that there are probably about a dozen left. Now, given the fact that I have only ever seen one white Z4M Coupe in the wild, and that was at a fair distance, the likelihood of one coming up for sale is remote to say the least. With sporadic searching of the classifieds you might see one pop up about once every two or three years but it has usually been sold by the time you get to it.

Like any good petrolhead, with a spare 20 minutes at lunchtime I randomly cruise the classified checking in on a range of car prices from the realistic to the ridiculous. You never know: Lamborghini Murciélago prices could have dropped by 80 per cent since last month (maybe). Randomly looking at an Aston Vantage one minute and a Leon Cupra Type R the next, the joy of the UK car market is in the sheer variety of brilliantly quirky toys on offer.

A Z4M Coupe scan returned the usual results, until I searched Auto Trader for a change. Randomly, three Coupes popped up and low and behold, one of these was finished in none other than Alpine White! In the plus column, it was very well-specced and looked in great condition. On the down side the mileage was slightly higher than I had hoped and two service stamps were from random non-specialist garages. Hm. But a lengthy phone call, a three-hour road trip in the M5 and a very detailed inspection later the car was mine.

First impressions were somewhat hampered by the fact that the garage had, irritatingly, thrown a mixture of budget tyres on the Coupe to get it through the MOT. Having driven up in the M5 on Michelin Pilot Super Sports you easily forget just how much of a difference top-grade rubber makes to a car. Back in the Coupe, as well as the obvious handling compromises, the budget tyres were amazingly noisy on all road surfaces.

In terms of plans for the car, a call to Michelin is up first. Other than that, the car will remain largely as the factory intended with worn trim receiving most of the attention. New kickplates for the door, steering wheel trim and mats have already arrived and will go on the car during a fairly significant detail that I have planned over the coming days.

With the M5 as the family car, the M3 as the show-off vehicle and the 306 Rallye as the track car/general dogsbody, I’m not entirely sure what the M Coupe is ‘for’. It is of course excessive to own four cars and I must rationalise soon but it is a task I will undoubtedly put off for as long as possible. You never know which car will triple in value next, after all!