Ariel Nomad: everything you need to know - pictures, specifications and features

Get the lowdown on this highly anticipated off-roader 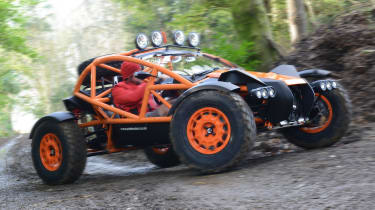 Ariel has already pretty much stolen the show when it comes to track day cars. The ultra-focussed Atom is a hard thing to beat and appears to be getting better and better with every new iteration.

So when a company with the pedigree of Ariel turns its hand to off-roading, we most definitely take notice. Enter the Nomad, Ariel’s rear wheel drive attempt at flinging people down gravel and mud as fast as possible.

Powering the Nomad is a 2.4-litre four-cylinder Honda engine. Taken from the Accord, it's gone through Ariel’s own tuning process which now sees it outputting 235bhp at 7200rpm.

Torque is set at 221lb ft, which given the car's 670kg weight, should make things particularly interesting when off-road. 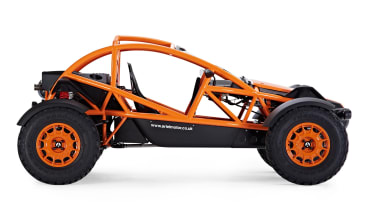 Other hardware includes long-travel suspension and a bulkier chassis with full rollover cage.

Gearing comes in the form of a manual six-speed box which from the looks of early images, has a shifter that matches that of a conventional Ariel Atom. The instrument cluster also appears similar.

Somewhat unsurprisingly Ariel’s combination of lightweight and horsepower has resulted in the Nomad having an impressive 0-60 time of 3.4 seconds. The car will also top out at 125mph.

Optional accessories such as uprated brakes, as well as different damping and wheel and tyre offerings also mean the Nomad’s driving dynamics will be highly customisable. 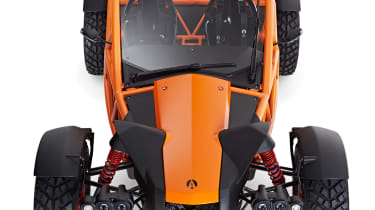 As is the case with any Ariel product, the car will be able to be driven at a variety of skill levels. Entry into the Dakar Rally for example would be completely possible.

The Nomad has been tested across multiple types of terrain, including race circuits and WRC stages, so there is absolutely no doubt it will perform as well as the Atom does.

Nomad prices will start at £33,000 for an entry level model. This is before you add anything from what appears to be a rather extensive options list.

The tubular chassis frame will be available in multiple colours, as will the polythene panels.Thanks to the full rollover cage, it will also be possible to spec a proper windscreen onto the Nomad. 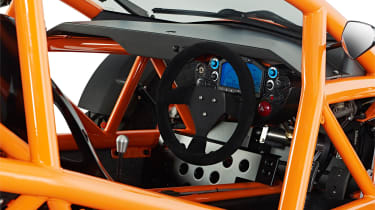 Those keen to take the vehicle further will be able to option roof lights, nerf bars and even luggage racks. Ariel will also be offering a package to make the vehicle road legal.

Ariel is still to confirm a release date for the Nomad, although early Summer seems likely.

At the moment the Nomad is a rare car in an even more niche category. Off the peg vehicles capable of driving on gravel at similar speeds are few and far between.

The closest thing that comes to the Nomad is something like the BRP Can-Am Maverick, although it is nowhere near as extreme.

Alternatively you could just opt for something like the rally prepped Mk2 Escort run by evo’s Henry Catchpole.