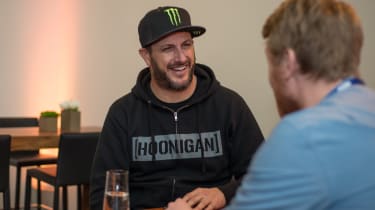 Fifteen minutes before sliding the new Ford Focus RS around a Cologne warehouse in front of the world’s media last week, Ken Block was talking WRC and daily drivers with evo.

First things first: you’re from the wrong side of the Atlantic for rally…

I grew up watching rally and, sure, it’s unusual for an American to be that interested. But I never had any interest in American motorsports – drag racing or NASCAR. They just didn’t seem that entertaining. The way the cars jumped, skidded and raced in snow made rally really interesting, so when I started to get the keys to my parents cars, that was the driving style I mimicked.

And what did those keys first open?

Toyota Corolla… The first car I ever bought myself, though, was a 16-valve GTI from the late eighties. That was such a cool era of car development – even that Golf was a very good car, but I still wanted to slide and jump the car, and pull the handbrake.

What does Ken Block now drive to the shops?

My daily driver is a Ford Raptor because I live in the mountains. I’ve also had the outgoing RS, which wasn’t officially sold in the States, but when I signed with Ford I had them bring one over for me – standard and in green.

That must have attracted quite a lot of attention…

Yeah, but it had to get crushed. It was brought over on a test carnet and in the end had to be shipped back to Europe or crushed. In the end we stole the good parts out of it before it was destroyed. Those parts went to [the wheel company] fifteen52 – we made some STs about a year-and-a-half ago.

You must have something faster than a Raptor lined up?

Right now, my newest daily driver that I’ve just bought is actually an RS200 – blue and white, from Norway. We’re going to paint it flat black. I haven’t driven it yet, but I just love RS200s. 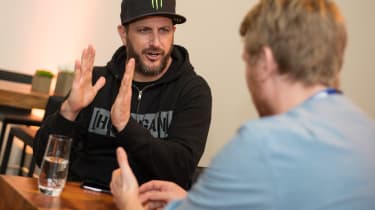 Something to do with that particular era of rally, perhaps?

The Group B era was just such a raw time for rally, with all-wheel drive systems being developed. The RS200 was one of the only cars fully designed from the ground up to be a Group B car.

Do you think rally can ever recapture the attitude of Group B?

The problem with all motorsport these days is that everything needs certain rules to keep everyone on an even playing field. It’s amazing what the cars are capable of today – even with the 1.6-litre engines (in WRC) the cars are significantly faster than Group B, and that’s mainly because of the suspension, traction and power delivery. I don’t know whether the FIA would ever just open the rules back up and say, ‘Here, develop whatever you want with this very loose set of rules and we’ll see what happens’, but you get to a point where it just becomes ultra-dangerous – too fast to race.

It’s not so much about what the car can handle?

They can handle a lot, but it’s all about keeping average speeds down on certain sections. WRC is already a very, very dangerous sport as it is, but you don’t want drivers dying in crashes. That’s why (the FIA) has actually dialled back certain areas of the sport. A lot of people don’t understand that.

So WRC is already at the upper threshold of what’s possible with a human at the wheel?

It’s already extremely quick, and the organisers look at average speeds on stages. In the States there are actually stages that get thrown out (of an event) after a rally because the average speed was over, say, 85mph. Once the cars are fast enough to exceed that limit, the stage can’t be used in that configuration anymore. Getting insurance for events is also a factor. 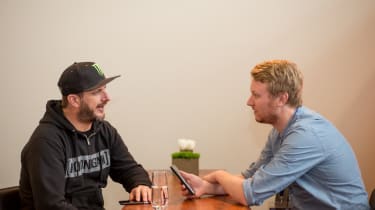 What’s the future for WRC in the States?

It would be great to see an event in the US, but rally just doesn’t have the same following there. Americans also like motorsports where you can sit in one place and watch an entire event. Rally’s quite different from that. I’m not sure it would happen in the States.

And if there were to be a Rally America, where would the best stage be?

Believe it or not, there are some great roads – tarmac and gravel – around LA. So it would be amazing to see a rally headquarters in downtown and have the drivers going out into the surrounding mountains.

Any Gymkhana plans for the new Focus RS?

We’re thinking about it. It’s a great car. The fact that Ford is making an all-wheel drive car is very cool, and they’re really setting the bar high for horsepower and the way the system works.