#myevomonth: Your car pictures from January

Snow clearly hasn't dissuaded evo readers from getting out and driving this month... 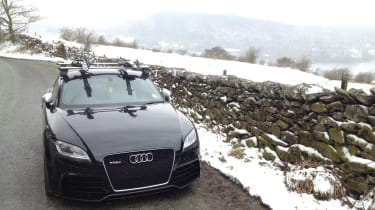 January has the potential for true motoring misery. The roads are clogged with bleary-eyed commuters exploring the nation's arteries for the first time in weeks, the roads are covered with salt and snow, and those traffic-free Christmas and New Year's mornings are another whole year away.

evo readers are better than that however, and plenty of you have sent in pictures showing just how much fun you've been having.

This month, that included an inordinate amount of entries depicting rear-wheel drive bahnstormers amid snowy scenes, and a whole host of Renaultsport Clios and Meganes on the sort of twisting roads they were designed for. A few evo fans further afield have also reminded us that January need not necessarily be grim and overcast...

We're now looking for entries from February. The long nights are still here but Spring is approaching fast. Perhaps you've arranged a trip away from the cold, or you're braving the roads of Wales and Scotland anyway and enjoying untouched wintery landscapes.

We're not looking for evo-quality photography - though something vaguely in focus and in a high enough resolution to look good in the gallery is preferred. What we are looking for though is a picture that speaks a thousand words. Had fun in a car in February? That should come through in your images.

The best photos could be in with a chance of a prize, too - #myevomonth is run in conjunction with Michelin, and we'll be choosing our favourite in April to win a set of tyres.