We pit two mighty super saloons up against each other

Between them, the M5 and E63 are the standard bearers for the modern super saloon; the yardstick by which all others cars in this class will be measured.

The M5 30 Jahre Edition celebrates 30 years since the arrival of the original M5 and with 592bhp it’s the most powerful German super saloon to date. In S guise, the E63 trails the M5 by just 15bhp – but which is best?

Both cars use twin-turbo V8s and drive their rear wheels only. The M5 has the slight advantage in terms of peak power – 592bhp plays 577bhp. Where the Mercedes counters is in torque output – its additional 1100cc of capacity means its 590lb ft comfortably out punches the BMW’s 516lb ft.

The M5 uses an eight-speed twin-clutch gearbox, though, while the E63 makes do with a less sophisticated seven-speed torque converter auto. The M5’s quicker shifts means that, in the real world, there’s very little to separate the two in straight line performance terms. Frankly, both are outrageously fast.

The BMW has slightly sharper throttle response, which is exaggerated by a quirk of the Mercedes’ throttle calibration. It can feel quite dull and lethargic at corner exit, which makes it fairly tricky to balance the car under power – until the driver has become more familiar with it, at least.

However, the Mercedes does have a livelier top end than the BMW. Whereas the latter seems to run out of revs 500rpm too soon, the E63 keeps on pulling right to the limiter. Winding this Mercedes out all the way really does demand your undivided attention.

BMW claims that the M5 30 Jahre Edition will hit 62mph from standstill in just 3.9 seconds. For a rear-wheel drive saloon car that weighs close to two-tonnes, that really is remarkable. The launch control function and rapid-shifting DCT gearbox can take much of the credit.

As part of the 30 Jahre upgrade BMW has adjusted the M5’s speed limiter to chime in at 199mph, rather than 155mph as per the standard car. The E63 is limited to 155mph in standard guise, too, but buyers can pay more to have that lifted to 186mph. Just in case you’re really in a hurry. 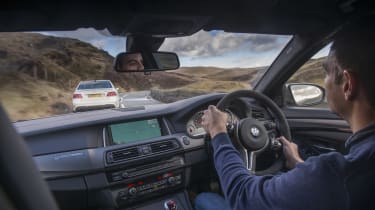 Both cars ride with a slightly sharp edge over bumps, but there’s enough pliancy in their softer damper modes to make everyday use a perfectly reasonable proposition. In fact, their more focussed suspension tuning actually means that there’s much less rhythmic body movement and roll on motorways and in corners, which some drivers will actually find preferable.

The M5’s driving position is better than the E63’s, which sits the driver just a little too high. It also has more delicate and direct steering – in fact, it scores highly in this regard – but the Mercedes also steers reasonably well for such a big car.

Both the M5 and the E63 have very positive front axles, which means they get into corners very keenly and without pushing into understeer too early, and they corner with the flat bodied response of much lighter cars. The more powerful car is also the most fun to drive, but there’s really very little in it. With vast reserves of power and locking differentials, each car can be provoked accurately and safely with the throttle pedal.

Whereas certain recent M Division products have struggled for traction and body control, not least the M3 and M4, the M5 actually feels really well tied down. It’s also less upset by its torque delivery in the lower gears.

The 30 Jahre Edition will be limited to 300 units worldwide, so it does have exclusivity on its side. However, at £18,000 more expensive than the standard M5 you are paying a significant premium for not a great deal more car.

Both the M5 and E63 are familiar cars now, but they remain right at the top of the super saloon pile. The BMW has the more sophisticated drivetrain, slightly sharper dynamics and a better cabin, too, so it knocks the Mercedes into the runner-up position.

To find out how the M5 and E63 stack up against the best of the super saloon competition, check out the May issue of Evo magazine (Number 208, on sale March 2015).