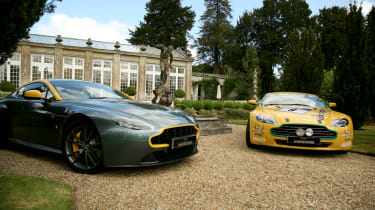 The Wilton Classic and Supercar show brought more than 500 iconic performance and racing cars together on the lawns of Lord Pembroke’s Salisbury estate. evo attended on the first of two days, gawking over priceless classics and saluting owners of legendary drivers’ cars under welcome June sunshine.

Below, we examine just five of Saturday's stars in more detail. Browse through our gallery to view several more of the show’s best cars. 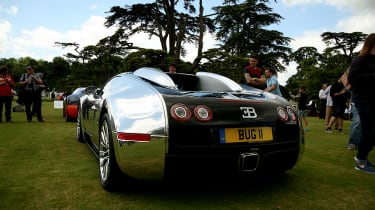 No fewer than 16 Bugattis were on show at Wilton to celebrate the 10th anniversary of the Veyron. Ranging from the first ever Bugatti racing car, the 1913 Type 18, two Bugatti EB110s and a handful of Veyrons, the net value of the collection comfortably fell into the tens of millions of pounds.

It's no surprise Wilton House decided to celebate the Veyron's anniversary; even a decade on from its introduction, it's still heralded as one of the greatest feats of engineering the automotive world has ever seen. The numbers speak for themselves: the fastest Super Sport model weighs a hefty 1838kg, but with a quad-turbo W16 engine producing 1183bhp, it can reach 268mph. 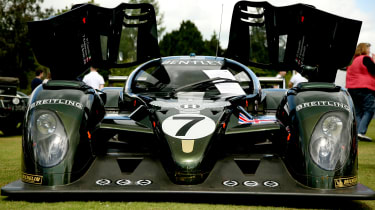 Crouched on the grass not far from the Bugattis was a British Racing Green Bentley Speed 8. The sleek Le Mans racer was one of two cars fielded in the 2003 24 Hour race, where it was the overall winner, finishing in front of the sister car. It was Bentley’s first win at Le Mans win since 1930.

The result halted Audi's three-year dominance at Le Mans, but it wasn't all plain sailing for the British marque in France. It took three years to achieve the race win, with a first-gen EXP Speed 8 debuting in 2001, finishing third, before a single development car took part in 2002, finishing fourth. After the 2003 win, Bentley withdrew from Le Mans. 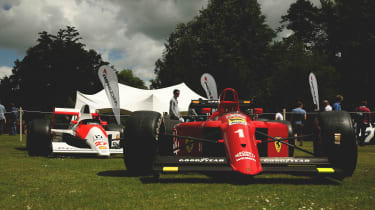 Reunited for the first time since their first corner smash at the 1990 Japanese Grand Prix, was Ayrton Senna’s McLaren MP4/5 and Alain Prost’s Ferrari 641. The crash - which secured the championship win for Senna - generated a lot of controversy, with the Brazilian driver eventually defending his move by saying ‘if you no longer go for a gap that exists, you are no longer a racing driver.’

Now, the memory of the crash is cemented in F1's history as a defining moment in a ruthless rivalry. And of course, Wilton’s weekend organisers couldn’t resist placing the cars next to each other in a way that mimicked the moment the impact happened. 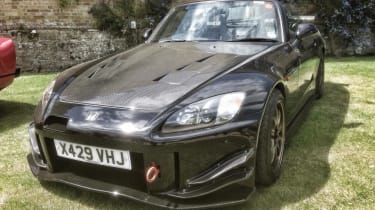 You probably won’t be surprised to hear Lord Pembroke - the man who gave up his garden to hold an annual car show - is a massive petrolhead. His collection of cars includes some stunning and rare machinery, including a Bugatti Veyron, but few would have expected him to own a heavily modified Honda S2000.

The car, which features bucket seats, a carbon bonnet, rear wing and lightweight wheels, is joined by a factory-spec R34 Nissan Skyline GT-R in Pembroke's collection. The purchase of both Japanese cars was supposedly influenced by years of playing Gran Turismo. 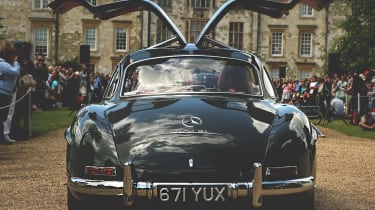 Arguably, the most beautiful car in Lord Pembroke’s collection is his Mercedes 300SL. Painted in grey with an interior trimmed in red leather, it was Lord Pembroke himself who drove the gullwing onto the Wilton show stand on Saturday.

Today, the 300SL is renowned as being a work of art, but back in the 1950s its 160mph top speed ensured it was also the fastest car on sale. Looking over the immaculate paintwork of Pembroke's car, it's probably safe to say his 300SL hasn't ventured that far up its speedo for quite some time.