Having delivered our verdict on the latest AMG C63, we’ve returned to its historical predecessor 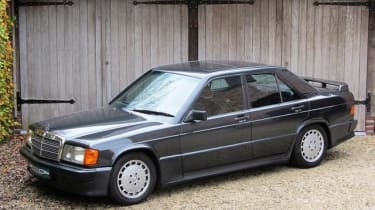 Ayrton Senna is as inexorably linked with the Mercedes-Benz 190E 2.3-16 Cosworth – to give the car it’s full title – as he is with the Honda NSX.

But where the late Brazilian champion is credited with helping to develop Honda’s everyday supercar, his involvement with the 190E was limited to winning a race in the car, at the opening of the then-new Nurburgring GP circuit in 1984.

To be fair, it was an impressive feat – Senna beat a grid full of professional racers, including nine former F1 world champions. This as a relative unknown at the time – racing for Toleman, Ayrton was still four years from winning his first F1 title with McLaren-Honda.

We digress – the other star of the show was of course the car, also new at the time. By modern standards, there’s nothing special about its specification. Power comes from an in-line 4-cylinder displacing 2299cc, developing 182bhp and 173lb ft of torque.

There was a five-speed manual gearbox, sending drive through a limited-slip differential to the rear wheels. Those wheels were attached to the monocoque by multi-link suspension, admittedly a relatively new development at the time, while the front end featured MacPherson struts. It would just dip under 8 seconds to 62mph, and go on to 144mph. A modern C180 BlueEfficiency diesel could out-sprint it.

It was successful on the race track though, and not just in Senna’s hands. Running in the DTM under AMG – albeit in hugely modified form – the car took 16 victories from 24 races, with Klaus Ludwig taking overall championship honours in 1992. 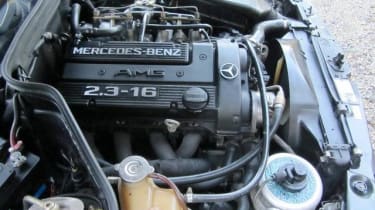 As this 1985 example on sale at Albion Motorcars in the Netherlands (via Classic and Performance Car) demonstrates, the Cosworth road cars can be hugely appealing vehicles.

Make no mistake - £17,750 is strong money for a 190 Cosworth. Prices are rising certainly, but this is probably the upper limit of what you’d currently pay for a non-Evolution. Particularly given that this example is left-hand drive.

But it’s hugely handsome, completely unmolested and the leather interior looks near-immaculate, despite over 88,000 miles of use since new. To echo a cliché, these cars were built at a time when Mercedes spared no expense. Building a car that goes on forever might not make much business sense, but it’s a very good thing for subsequent owners.

It’s the desirable manual too, and the dealer reports a full service history. And despite its vintage, it has air conditioning – a welcome addition for a black car with a black leather interior.

While the 190 doesn’t quite have the chops to echo its racing variant and match a good E30 M3 in terms of performance and handling, the price of equivalent M3s even makes this seventeen-grand example look conspicuously good value.

> Find Mercedes 190Es for sale on Classic and Performance Car 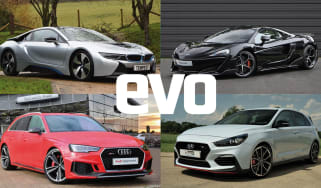