Ask Goodwin - What’s the best/worst car in which to pick up your beau?

In Goodwin's experience, cars can make or break a date... 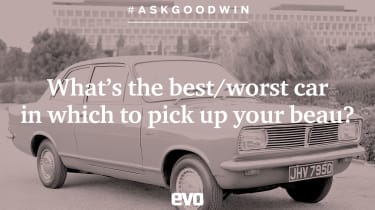 What’s the best/worst car in which to pick up your beau? Joseph Pearce

A beau is male so I’ll twist your question and answer from my own experience of taking out girls in cars. The big issue in my youth, which in this department runs from 1979 when I first got a driving licence, was not so much the car itself but how reliable it was. And for most of my early machines the answer is not very. My first car was a Vauxhall Viva HB, brush painted in dark green and bought the day I passed my test for £40. The first time I took a girl out in it for a date the fan came off the water pump pulley on the way to the pub and made a hole in the radiator. Of course I carried tools in the boot and managed to put the fan back on with the two bolts that I found sitting in the engine bay. The leaky radiator provided enough cooling until we got to the pub and could blag some water.

Then there was the Chrysler New Yorker with 440 cubic inch engine, borrowed from a pal for a date. She didn’t understand the appeal of a full-size American car from the off and was even less enthusiastic when the column shift linkage fell apart as I was manoeuvering in the restaurant car park, completely blocking the exit as I scrabbled around under the car with a torch trying to bodge back together the linkage.

The most successful and impressive date in a car was with the current Mrs Goodwin who I arrived to take out driving a dark blue and immaculate Dino 246GT. About 15 years ago Maranello Ltd in the UK had a collection of old cars including this Dino and after a bit of arm twisting they let me borrow it for a weekend. She was mightily impressed by the car. I proposed to her in a Vanquish (she loves Astons) and it was one of the first Astons that I had driven that didn’t break down.