Ask Goodwin - What’s the biggest brown trouser moment you’ve had behind the wheel? 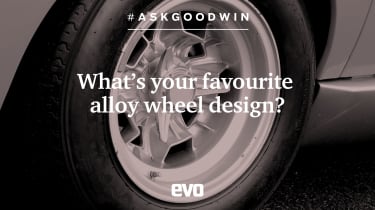 What’s the biggest brown trouser moment you’ve had behind the wheel? Alan Taylor-Jones

That’ll be the event that became known as Goodwin’s '50,000 lira note incident’. We were driving back from Italy in a Jaguar XK8 and an Aston Martin DB7 having just compared the two to the new Ferrari 550 Maranello. I was driving the Jag as we approached a toll both in the Aosta valley not far from the mouth of the Mont Blanc tunnel. In those days, before draconian fines and the possibility of chokey, we used to drive everywhere flat out. So for the last few hours we’d been smoking along around 140-150mph. That’s about the sort of speed I was doing while fiddling around in my trouser pockets for my pre-stashed lira note to pay the next toll. Out fluttered a 50,000 lira note that gently landed in the passenger footwell.

Without thinking, I reached down for it. While my head was under the dashboard I heard this really loud thrashing from the wheels as they ran over dirt and gravel. Panicking, I looked up to see that I was about to hit the central reservation. Yanking the wheel to the right the XK went into a 140mph wobble as I shot across the middle lane. It took a while to get things back in order and much longer for my heart rate to settle.

When we got to the tunnel we stopped for someone to have a fag. ‘What the hell happened to you back there?’ they asked. ‘Er, a hubcap came off a Peugeot in front of me and I had to swerve to avoid it,' I fibbed. I could see that they didn’t believe a word of it. Later, at a lunch stop, I admitted that I’d nearly stuffed the Jaguar into the barriers while not watching the road.