Button remains at McLaren for 2016. Here’s why the team was so desperate to retain him 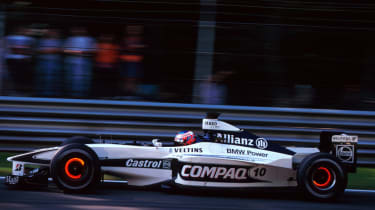 A 20-year-old Jenson Button rolls onto the starting grid behind the wheel of the number 10 Williams-BMW FW22. He’s starting a lowly twenty-first after a troubled qualifying, but manages to get off to a storming start, charging through to fifteenth before the end of lap one. Unfortunately, his race is cut short with engine trouble after 46 laps, but it’s still a fantastic F1 debut – the world has witnessed Button’s raw pace and skilful race craft first hand.

That race, the 2000 Australian Grand Prix, was some 15 and a half years ago, yet Button is still recognised as one of the most complete drivers on the grid. His current team, McLaren, provides evidence for this - it fought a long battle to keep the Brit on-board for 2016. It announced he will stay today, so clearly, the team believes Button is one of its best chances at recovering from what is one of its darkest times.

With this in mind, we thought it right to look back at some of Jenson Button’s best F1 drives, drives that have helped him become recognised as one of the very best. We list our picks below. Think we’ve missed any off the list? Comment with your favourite Button moments in the section underneath.

In only his second F1 qualifying session Button out-qualified his experienced teammate Ralf Schumacher, starting two grid slots ahead of him in ninth. Schumacher did make his way past the rookie early on, but Button held his own and even stunned the crowd with a daring late-brake manoeuvre on Jos Verstappen late in the race.

He finished sixth, one place behind Schumacher but perhaps more significantly, gained one World Championship point (points were only awarded from first to sixth place back then). At the time, he was the youngest point scorer ever.

But Button, who was in his second year at BAR-Honda, suffered a 10-place grid penalty thanks to an engine change penalty, placing him thirteenth on the grid. Nevertheless, the 24-year-old Brit fought hard, managing to climb all the way back up to third by the second half of the race. Michael Schumacher was out of reach but Button was able to catch up with second placed Fernando Alonso of Renault.

The pair battled hard around the 2.8-mile circuit at speeds of well over 200mph, with Button teasing several manoeuvres only to hold back and settle in behind the Spaniard. But the patience paid off as he finally made a late lunge into the hairpin to nab the place and secure one of 10 podium finishes in 2004.

BAR-Honda driver Button lined up fourteenth on the grid at the Hungaroring after an unscheduled engine change landed him with a 10-place grid penalty. The track was wet – the first time the circuit had hosted a rain-affected F1 race – and McLaren’s Kimi Raikkonen led the field off the line.

Button’s pace in the slippery conditions was strong, but it wasn’t until he opted not to pit during a safety car period that he climbed up to second place. Alonso held a commanding race lead, but then drama struck as a wheel dethatched itself from his Renault and he crashed out.

That enabled Button to inherit the lead and take the race win – something that seemed almost impossible just a couple of hours earlier. It was Button’s first F1 win and arguably one of the most popular victories in recent F1 history.

After nine years of having to race against drivers with faster cars than his, 2009 was the first year that Button was now cocooned in a genuine pacesetter. Admittedly, it was Honda that had developed the chassis of his Mercedes-V8 engined BGP 001 the season before, but the Japanese carmaker’s decision to ditch the sport to save money had nearly left the team and its drivers without jobs. A late deal just three weeks before race one ensured the team would race under the Brawn GP moniker.

Given this bumpy period and a lack of title sponsor, it was remarkable to see Brawn GP’s drivers, Button and Rubens Barrichello, starting first and second at the season opener. The white cars were clearly faster than their rivals’ machines – the BGP 001 was the only car at the start of the season to run double diffuser aerodynamics – and Button wasted no time in asserting his place as favourite for the title by taking the race win.

It was far from a simple lights to flag victory, however, because a sticking wheel during a pit stop mean Sebastian Vettel of Red Bull was back in the hunt with just a few laps remaining. But the German eventually clashed with Robert Kubica, allowing Button to comfortably take the win.

Having qualified seventh, two places behind McLaren teammate Lewis Hamilton, Button’s chances of a podium looked slim. But with rain falling as the cars sat on the Circuit Gilles Villeneuve starting grid, it was almost impossible to predict the race’s outcome.

The race was hectic – six cars would retire due to accidents and spins – but Button survived the carnage to claw his way up to second position by the race’s closing stages. Sebastian Vettel, the reigning World Champion, was up ahead and appeared to be out of reach of a hard-charging Button.

But Button remained unphased, hammering in fast laps in the changing conditions only to find himself a couple of tenths behind the Red Bull. And his efforts were rewarded – a rare mistake by Vettel let Button slip past on the last lap to take the victory in spectacular fashion.

Though Button played little part in providing entertainment at the 2012 Belgian GP, the reason for the race’s inclusion on this list is because it’s probably the best demonstration of his raw speed.

Many pundits labelled his McLaren teammate, Lewis Hamilton, as the outright faster driver, but at Spa Button not only out-qualified his fellow Brit by eight tenths of a second, he comfortably controlled the race to cruise home with a hefty advantage.

Sebastian Vettel was his closest contender, but even he crossed the line a significant 13 seconds behind the winner, emphasising just how untouchable Button was that weekend. It was just one of several races where Button proved his worth against Hamilton – a driver many label as the fastest over one lap.

It’s sometimes easy to forget that F1 drivers were racing before Formula 1. Like every other F1 driver on today’s grid, Button first cut his teeth in karts. But rather than just using it as a stepping stone to reach his ultimate goal, Button stood out as one of the best kart drivers to have ever raced.

Through his early years he raced against the late Dan Wheldon and Justin Wilson, Anthony Davidson and many more drivers who went on to achieve big things. Button’s karting career culminated with the European Super A championship win in 1997. He was just 17 years old, making him the championship’s youngest ever winner. Karting Magazine now ranks him ahead of Lewis Hamilton in its best British drivers of all time list.

The footage below is of Button racing in the World Karting Championship from two years earlier. Driving a kart with a 100cc two-stroke engine, it’s a far cry from the world of F1. But as the race shows, it was just another avenue for Jenson Button to demonstrate his natural talent.