The Tesla Model S’s road noise reducing tyre tech. How does it work? 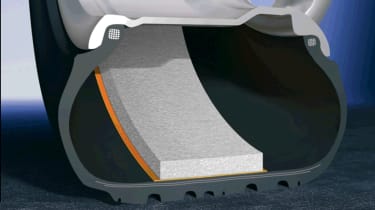 Imagine the number of sleepless nights the engineers tasked with creating tyres for the Tesla Model S had to endure. Not only do the electric car’s tyres have to handle as much as 691bhp (the peak output of the P90D), with no engine, gearbox and exhaust noise to drown them out, they also have to be as quiet as possible. Add to that the fact they need to have a low rolling resistance - essential to ensure good range - and you've got quite the engineering shopping list.

Continental's attempt to rectify this comes in the form of something it calls 'ContiSilent technology'. Essentially the system uses a strip of foam which wraps around the inside of the tyre to reduce road noise as much as possible without any knock-on effect on grip, response or durability.

Continental looked at the frequencies typically generated by tyres and then developed an acoustic foam which would do its best to cancel them out. The noise tyres produce actually sits in a frequency that the human ear is incredibly sensitive too, so reducing this by as much as possible is definitely a good thing, particularly in a car as quiet as the Model S.

This sound-absorbing solution can be applied to almost any radial tyre. ‘It’s made up of a 100 to 120mm wide strip of foam that spans all 360 degrees of the tyre, bonded to the carcass using ContiSeal [Continental’s puncture sealing adhesive],’ explains Richard Durance, Continental’s Manager of automotive engineering for passenger cars and light trucks. Since it’s so light, the foam has no noticeable effect on performance. Durance continues: ‘The tyre doesn’t have to be specifically tuned either. There really aren’t any negatives aside from the small increase in cost, though unsurprisingly, the foam’s benefit won’t be so noticeable on some [louder] vehicle platforms.’

At the moment, key cars featuring Continental’s ContiSilent technology include Range Rovers on 22-inch wheels, several Audis and the Tesla Model S. The Model S’s tyre is essentially a foam-equipped ContiSportContact 5 (the standard version of which won our 2015 Tyre Test), so it still offers the same level of grip, steering response and wet performance. And for cars that don’t feature this tech from factory, ContiSilent equipped tyres are also available on the aftermarket.

Continental’s foam technology is one of the first purpose-designed solutions to address what is going to become a more prevalent problem. The manufacturer has also experimented with rim-based foam that would fit to the inside of a car’s wheels, but the tyre-based solution proved most practical for fitting and removal. Several other manufacturers are also set on creating their own noise-reducing constructions, but as proven by its use in Range Rovers, Audis and Teslas, Continental’s foam technology is one of the most advanced.

As cars continue to get quieter and more all-electric models enter the market, demand for quieter tyres is only going one way: up. With this in mind, could foam-equipped tyres one day become the norm? It certainly seems plausible.