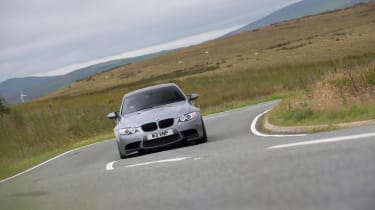 Part 3 - How Öhlins suspension performs on the track

of the evo Triangle in north Wales. Now, in the final stage of his test, Reeves heads to Anglesey Circuit, home of evo’s ‘Leaderboard’ track tests. Anglesey is a spectacular venue and a thrilling place to drive a car like his E92 BMW M3, but it’s also a challenge, especially when you’re experiencing the place for the first time.

Driving a powerful rear-wheel-drive car on an unfamiliar circuit places maximum emphasis on confidence, feel and consistent handling. Having arrived at a setup he’s happy with on the road, it’s logical for Mark to keep his Öhlins Road & Track suspension in the same settings (five clicks front, ten rear) for his first track session. How does it feel? Over to Mark...

‘I’m not a hardcore trackday driver – I suppose you could say I’m an occasional but enthusiastic trackday goer. It’s good to be able to push your car that bit harder and really get a feel for it. I’ve been steadily learning the M3, but I always treat it with respect, so I’m surprised how connected I feel to it here. You can only commit so much on the road, but here 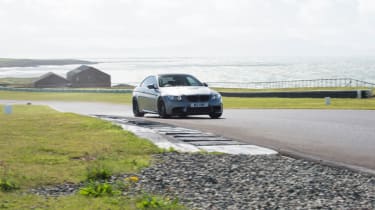 I can really lean on the suspension and feel it working. I’m feeling like I want to push that bit harder. I’m learning with every lap.’

From the passenger seat it’s clear he’s comfortable with how the M3 tackles the circuit, and more importantly that he’s enjoying how it feels. At least that’s what the smile on his face is telling us! It’s also interesting to note that Mark is feeling increasingly in-tune with the handling of his car and thinking about how it’s responding to his inputs. With such a range of suspension adjustment it’s no surprise that we return to the pitlane once more so he can apply a more extreme track-biased setup (zero clicks on the front and seven on the rear), before heading back out on track once more for a back- to-back comparison.

Mark immediately carries more speed into the braking zones and turns in with more commitment. He’s chasing the throttle sooner, too, and clearly being drawn deeper into the driving experience. It’s great to see. No wonder Mark is buzzing with excitement when we complete a cool-down lap and return to the pits. 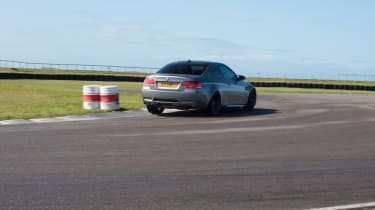 ‘Wow, that was magic!’ he says. ‘It feels like a different car. You can feel the steering’s more responsive to inputs, but it’s also finding a bit more bite and precision. I love the way you can really push it into the corners knowing it has some grip and stability in reserve. I think I even got the tail moving a few times, so I know I’m feeling happier to go for it. That was great fun.’

It’s been fascinating to see a driver learn more about their car, and to see how its character and ability can be changed with just a few small adjustments to its suspension. For Mark the road and track testing has been little short of a revelation.

‘I’m thrilled with the road setup,’ he says. ‘It delivers the body control I was after, but also manages to round off the sharp edges that the standard EDC suspension had in Sport mode. This is the perfect everyday setup that I can live with, no question. That said, I love the track setup, too. It makes the car so responsive, but also more controlled. I really feel like I can get so much more from the car and myself, which is really exciting. In the past my mates and I have hired the sprint circuit at Curborough. I still have my old competitive urges from my motocross days, so driving against the clock always gets my blood pumping. I’ll definitely have a go in the M3, though my mates will say I’m cheating now I’ve upgraded to Öhlins!’