Ask Goodwin - Would you ever buy a car as an investment?

With many classic cars rising rapidly in value, will Goodwin be riding the wave? 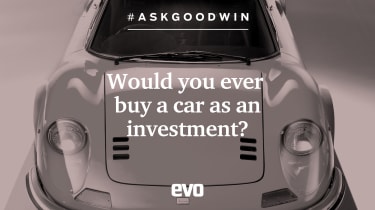 Would you ever buy a car as an investment? - Duncan Crabtree, Bristol

No. Firstly, you can be sure that if I got into speculating on classic cars the market would fall through the floor the very next day. I think that’s not far off happening anyway. Did you see the Ford Escort RS Turbo that went under the hammer for 60 grand the other week? That can’t last. We’ve seen the bubble burst before.

But it’s not just the thought of losing money, but the very thought of owning a car just to make money on it. I’m immensely fortunate to have earnt a good living from my love of cars and to start buying them up to make money would be a bit greedy. And then there’s the worry of owning something very valuable. The old 911 that I once owned began to be a bit of a liability and less fun to own the more valuable it became.

Talking of that car, had I kept that bitsa 911 it would probably be worth almost six figures in today’s market where anything with a 911 badge would appear to be worth more than life itself. Throughout my motoring life cars have floated past my eyes that were once affordable and would now be worth a packet, such as the Dino that was available for £3,500 that I once considered. Most of my regret about not buying such cars years ago is not how much money I could have made, but the fact that I cannot now afford to own them.

In the late 1990s a Surtees TS8 came up for about £18,000 complete with engine. I was recovering from a divorce and had just bought a flat so didn’t have a bean, but I seriously thought about flogging the flat, buying a race transporter with a bunk bed in it and sharing my ‘living room’ with the Surtees. Although I would probably have spanked the car and ended up living in a truck with a load of scrap metal for company.

No, I think I’ll keep fiddling around with old bangers and leave the investing to others.