The key used to be one of your first points of interaction with a car. So Honda made its NSX key as special as the car itself 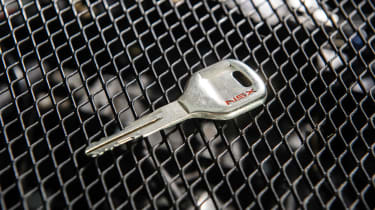 The key to your car is of greater meaning than its modest dimensions imply. Obviously it starts the engine, but there’s much more to it than that, especially if the car in question is of an evo persuasion. You don’t get quite the same jittery sense of anticipation when you reach into your pocket for your house keys, do you?

The best keys are the simplest ones, of course, featuring only a flattened plane to grip between thumb and forefinger and a serrated snout to rattle down the barrel and coax the lock pins into position. Twist once to awaken the electrics and hear the fuel line gulp, twist again to fire a high-voltage current to the spark plugs.

Sadly the significance of this ritual is lost on most manufacturers now, and as a result this satisfyingly gritty sensation of physically prompting an engine into motion is becoming rarer by the day. In fact, you have to go back many years to find a mainstream supercar with a proper key.

> More: Full review of the new Honda NSX – was it worth the wait?

What you see here is one such key – the one Honda supplied with the NSX for the model years from 1991 to 1996. A bit like the car it unlocked, it was a futuristic metallic slither with the sole adornment of three letters. With all the beautiful simplicity of the old Ferrari keys but without the Piaggio Ape vibe, compared with something like Aston Martin’s nauseating ‘Emotion Control Unit’ it is simply in another galaxy of cool. And emotion, for that matter. That it could also easily be mistaken for the key to one of Honda’s excellent lawnmowers only adds to its charm.

Part 35113-SL0-A11 was not, as it is often said, made of titanium. Honda instead used Monel, an expensive and highly corrosion-resistant alloy of nickel and copper that’s often used in marine engineering. Non-magnetic and able to maintain its shape at searingly high temperatures, it has been used in the anchor cables of minesweepers, on experimental rocket-powered aircraft, for military dog tags and, most impressively, for the strings of Sting’s Fender Telecaster. Monel is so robust that cutting a key blank is said to be a highly risky undertaking that could easily damage the machine. A quick job at Timpsons it ain’t.

As a material, then, Monel was overqualified, but few keys have had a higher calling than that of life-giver to the all-aluminium VTEC engine at the centre of the NSX experience. It was three litres of open-ended power delivery with a six-cylinder bark that hardened viciously as the revs climbed. It was something of a masterpiece, it had titanium con rods, it was built by hand, and the key-related overkill was probably justified.