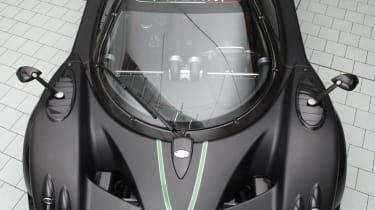 I’ve never seen the Pagani factory look quite like this before. It’s snowing so heavily outside that it’s turned the surrounding area into some sort of winter wonderland, yet inside no-one seems to have noticed because all eyes are on the extraordinary car that’s occupying pole position in the final assembly area. It’s the most expensive, most extreme supercar that Pagani has ever built – it’s the world’s first Zonda R.

As we take in the creation before us, the official launch of the Zonda R is still a couple of weeks away, at the Luxus motor show in Vienna in January. Even the ten people who have put down deposits have yet to see the car in the carbon (they’ll get a private viewing at the Monza circuit shortly), so I’ve struck particularly lucky today. I was here to see Horacio Pagani on other business, but with the new car nearly finished he couldn’t resist giving me a sneak preview.

Zondas are pretty dramatic devices at the best of times, but this is Zonda like you’ve never seen it before – meaner, more aggressive. On appearances alone it should be obvious that you won’t see this Zonda overtaking you on the public highway. Instead it is intended to be the ultimate trackday car; think along the lines of Ferrari’s FXX.

The R’s massive rear wing dominates everything. Decorated in Pagani’s new logo, it’s bigger than that fitted to any other car I can think of. At the opposite end the R’s nose is even more shark-like than, well, a shark. The overall effect is dramatic to say the least. Horacio is keen to point out that, although it wasn’t the original intention, everything had to be changed from a regular Zonda. Every single panel is unique to the R, as is the engine, suspension and drivetrain. In fact, only 10 per cent of the components are shared with a standard Zonda. Even the spindly mirrors that look identical to those on the ‘F’ are new and 30 per cent smaller in order to reduce drag.

Helping Horacio keep the build process on track is Borkovic Nebojsa, the technical co-ordinator of the R project. Coming from a background in Formula 1 – he was right at the heart of Ferrari F1 between 1995 and 2000 before joining Toyota to help it launch its F1 programme – he’s well used to exotic machinery, but even he can’t quite believe the detailing on this car. The suspension arms are machined over many hours from a solid billet of aircraft-grade aluminium, every bolt and fastening is made from titanium, and each component has its own unique number etched onto it.

The engine is an update of the one first seen in the late-’90s Mercedes-Benz CLK GTR. The dry-sumped 5987cc V12 produces 739bhp at 7500rpm, is fitted with 12 individual throttle butterflies (one for each cylinder) and is capable of revving to a heady 8000rpm. In true Zonda tradition the noise at full chat is meant to be something else, helped by the exhaust having nothing in the way of silencers between cylinders and tailpipes.

The massive power is delivered to the road via a six-speed Xtrac automated sequential gearbox, capable of swapping gears in a mere 20 milliseconds – that’s close to F1 speeds and three times faster than the Ferrari Scuderia’s F1-SuperFast system. Combine all this firepower with an all-up weight of 1104kg (1070kg ‘dry’) and you soon reach the conclusion that performance is going to be nothing short of ballistic.

To help the driver keep it all under control, Pagani has equipped the R with the latest generation of Bosch Motorsport traction control, where the amount of intervention is controlled by a 12-stage switch fitted to the steering wheel. There’s another Bosch Motorsport ECU used to control the degree of ABS the driver fancies on the Brembo-developed carbon-disc, six-piston-caliper brake set-up, and even the engine mapping can be changed via another switch on the steering wheel. In fact, the amount of fiddling owners can indulge in is almost limitless, as each car will come with it’s own laptop that will enable numerous settings to be altered.

The 6-litre V12 sits around 50mm further forward than the Zonda F’s 7.3 and is bolted to the bulkhead via a machined subframe. It’s a smaller unit, and because it is dry-sumped (something that Horacio has always wanted for the Zonda as it eliminates the chances of oil surge and therefore potential engine damage when maximum cornering G is reached on track) its height is reduced by some 80mm, meaning that the rear bodywork can be lower than on a regular Zonda. This, in turn, allows that giant rear wing to work in ‘free air’. In conjunction with the other aerodynamic features, including a protruding front splitter and a huge rear diffuser, the end result is nearly 2000kg of downforce at 300kph (186mph).

The idea to create the R initially came about after Pagani received a request from a Zonda owner who wanted to have the most extreme version of the car that Horacio was prepared to build him. It didn’t need to be capable of being driven on the road as he wanted to use it purely on track. After a few months of deliberation, Horacio finally agreed to do it – as long as he could find a couple more orders to go with the original request, meaning there would be three cars in all.

However, once word got out about what the factory was up to, deposits started rolling in. As of January 2009, Pagani had taken ten orders, with a promise to these initial buyers that no more than 15 customer Zonda Rs will be built, plus one extra one for the factory to keep for prosperity. Of those ten customers, eight are existing Zonda owners (for one this expand his collection of Zondas to four!), while the remaining two are completely new to Pagani and include one whose car is destined to live in China. Not bad going when you consider the car costs 1.365 million euros plus taxes and we’re meant to be in the middle of a global credit crunch.

Selling the extra cars was obviously great news for Pagani as it meant the development budget could be increased. The result was that there was absolutely no compromise during the development process – everything on the Zonda R is quite simply the best of the best. It was a massively enjoyable development project for all those involved too, made even better by the fact that there were no homologation rules they had to comply with. But some people are never satisfied and Borkovic still thinks that he can get the car’s weight down to 1000kg before production gets into full flow, with subtle changes to the wheel hubs and brake calipers being high on his hit list.

Make no mistake, the Zonda R is a very special car, more akin to mechanical sculpture than conventional automotive engineering as we know it. It is also far more extreme than I, for one, was expecting, but the result is nothing short of magnificent. I just hope the new owners realise that they have in fact ordered something that is verging on being a Group C race car and not just a quicker version of the Zonda we all know and love.