After a third place at Castle Combe, Roger Green was looking for another podium at Donington. Then it all went horribly wrong 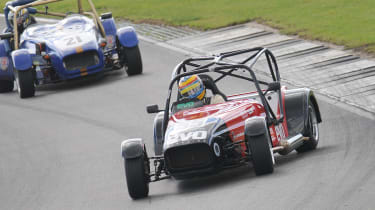 Motorsport has an ugly habit of kicking you in the teeth. Just when you think you’re getting on top of the game, something invariably happens to shatter your hopes and bring you crashing back down to earth. The Castle Combe round of the BARC Westfield Sportscar championship was great for us; we’d qualified on the front row, led a race and finished on the podium, leaving our confidence sky high. So high in fact that we didn’t bother testing before the next outing at Donington; indeed, in the intervening fortnight we didn’t lay a single spanner on our red and black Aerorace car.

Turns out we should have. In the last few laps at Combe the car had felt a little off-colour, though I’d assumed it was just down to the worn-out tyres, but in qualifying at Donington some of the spark was (quite literally) missing. The 2-litre Ford Zetec unit didn’t feel as strong as usual and despite giving it death down the Craner Curves I could do no better then 12th, our worst showing all season.

A little post-match analysis revealed that we were running lean: our NGK plugs all had white tips and, save for junking that set and screwing four new ones in, there was precious little we could do before the race. Making matters worse was the thought that our main rival for the Aerorace championship, Michael Ellis, had planted his car third on the grid. We took the only option open to us and went down the pub for lunch.

I returned with a determined mindset: there was nothing to lose, so I would be aggressive on the first couple of laps and take it from there – onwards and upwards! However, the likelihood that we’d solved our fuelling issue was slim and so it proved. By the end of the first lap I’d forced my way up to seventh and then took a couple more scalps on the second tour. I could see the leaders just up ahead but, somewhat depressingly, I already knew that this would be as close as I was going to get. The punch out of the turns wasn’t just there and I’d only gained all those places by using the slipstream from the cars in front and employing some ridiculously late braking.

That was the way of the race: my only chance of staying in touch with my adversaries was to squeeze in front and slow them down in the middle of the corner. It was a short-term tactic that relied on me being able to stay in their draft down the straights, but one-by one they began to pull away until I was back where I started. Michael Ellis, meanwhile, finished just a fraction of a second behind race winner Andrew Spencer, eating into my championship lead. It’s all to play for, then, as we enter the final few rounds and you can bet we’ll be doing all we can to ensure our home-built car is back on form for the Brands Hatch and Thruxton rounds in late August and early September.

You can watch our on-board action by logging onto www.evo.co.uk and keep in touch with all the latest developments in the series (including more videos) through www.wscrda.co.uk