Fresh from third place on the Isle of Man and with his sights set on another podium, Henry Catchpole finds his world turned upside down 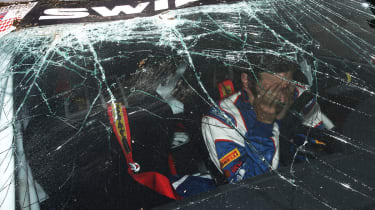 It’s late evening now and as much as anything I’m writing this as some sort of attempt at catharsis, so please bear with me and apologies if I get a bit carried away. I’ve done the shouty swearing, I’ve thumped stuff, I’ve even shaved for the first time this month. But still all the what-ifs and should-have-beens are jostling in my head every time I close my eyes and try to go to sleep. So now I’ve switched the light back on and I’m writing it all down in the hope that it might exorcise a little bit of the disbelief, might soothe the utter frustration at not being able to turn back the clock and might assuage the deep, bitter, pit-of-my-empty-feeling- stomach disappointment that I’m struggling to contain.

We’d done all the hard work. We’d been fourth at the start of the day and battled through… but I’m getting ahead of myself. The rally started on the Friday evening, about 30 hours ago. I was much calmer than on previous occasions as we drove from service to first stage – I think the podium finish on the Isle of Man last month had taken a bit of self-inflicted pressure off. But then the first two stages were cancelled due to big accidents and the tension started creeping back. SS3, Parkanaur, was the first stage we actually drove and it was tough. It’s a narrow, bumpy, technical stage and gravel on a ‘three left’ saw me do a bit of unintentional hedge interfacing. There was also a hilarious moment when we came over a crest where I’d put in the notes ‘aim for brown telegraph pole’. Of course the pole had been blown or taken down overnight and I was left trying to imagine where I’d be if I were a brown telegraph pole.

But we emerged unscathed and back to service. Time for the big light-pod and three stages in the dark. Despite their size, the lights are not great, to be honest, and as I try to peer into the darkness between the hedgerows I feel like we’re pottering. Chris was finding the unrelenting nature of the stages tricky to keep up with in the pace notes too. There was even an uncharacteristic wrong call from him at one point which saw me on the grass and the lockstops. Later I had to stop to avoid two cats (one ginger one black and white) outside a farm. So all in all it was quite a surprise to discover that our times were good. The last stage (with feline interference) less so, but fourth out of the Swifts was much better than I’d hoped.

It was well after midnight by the time I crawled into bed last night but at 8am this morning we were already driving the car back out of Parc Ferme. We were 14sec behind Nick Rowland (the minor royal look-alike who we’d battled with on the Isle of Man) and a further, and probably insurmountable, 30sec behind Gordon Nichol in second. I felt relaxed again in the daylight and Chris and I had agreed that I shouldn’t take any risks, just drive as neatly and cleanly as possible and be patient trying to overhaul Nick. I’d wound a bit more brake bias off the rear this morning and the car felt really good. Two stages later we were third and catching Gordon.

Being relaxed was definitely helping, a calmer approach allowing me to see everything earlier, accelerate more cleanly and just drive faster but without feeling like it. I was also learning the art of cutting the corners effectively, hooking a wheel off the tarmac (where the notes or my eyes told me I could) to straighten a corner a little more and grab a precious tenth.

Then the rain came and we got faster still. Despite being out on slicks I felt happy with the way they were sliding, and just concentrating on and trusting the pace notes seemed to be rewarding us. By the time we came back into Service to change for wet tyres we were ahead of Gordon by 22 seconds. The next two stages we simply pulled away even more and everyone back in Service in Armagh was talking about our times. I was up near Ross Forde and Mark Gamble, drivers whose times I simply couldn’t comprehend when I started out on the Jim Clark a couple of rallies ago. All the guys from Suzuki – Ian, Ian, Ian, Alan, Nick, Richard and Bert, the whole team – were actually proud of me, proud that I’d come so far in so little time. Proud of what I was doing in my first season of rallying. And I was so happy that I was rewarding the gamble they’d taken in letting me drive in the championship. I felt like I was finally proving that I wasn’t just a hack who could occasionally poke a car sideways out of a hairpin for a camera. I deserved to be in the British Rally Championship.

And then two hours later, there it was. A ‘two right’, half a mile from the end of the very last stage. Mud on the inside, just like pretty much every other corner in the tight, narrow Irish stages. The weather was filthy but we’d been revelling in it and we weren’t even pushing – there was no need, we had a very comfortable lead over Gordon Nichol in third.

Yet for some reason as soon as I turned in the little Suzuki understeered: not that nice, reassuring, scrubby understeer that you can work with, but that horrible, total understeer as though you’ve hit ice. That glassy sensation from where the front tyres were a moment before, the tingling in your hands as the steering wheel suddenly goes light and fails to react. You’re a passenger. Why it happened there when it hadn’t on any of the previous hundred corners I simply don’t know. It certainly wouldn’t have happened on the last lap of a circuit race so I think that’s what people mean when they say ‘that’s rallying’. But as I try to come to terms with it in the wee small hours, I rather wish I had something tangible to pin it to, just so I could say ‘well I won’t do that again’.

A ‘two right’ isn’t that quick, and at first I think we might just nerf the grassy bank on the outside of the corner, but we hit it at quite a shallow angle and the wheels on my side ride up it, tipping the Swift inexorably past the point of no return. All that’s going through my mind is, ‘Please no. Not now, not when we’re this close.’ Chris’s window smashes first, then the windscreen. Then I’m upside down, weight on my shoulders, hanging in my belts. It’s slightly darker with wet tarmac filling the windscreen but I’ve been inverted in aeroplanes a few times so I don’t actually feel anxious. Chris doesn’t seem to want to stick around though and has let himself out of the door. I look up (or possibly down) and discover that instinctively my left foot has dipped the clutch and there are revs still on the rev counter. Now I’m shouting at Chris to find people to push us back the right way up. Despite the fact I’m upside down with two smashed windows, all I can think is ‘we might still be able to salvage second if we can get going in the next thirty seconds’. Is that normal? Perhaps it really was a rush of blood to the head.

I’m still inside, belted up, when the car’s rocked back onto its wheels a minute later. As light floods in, a shower of shards glitters down from the windscreen and frosts most of the dashboard. Chris is back, a marshal is telling him to do all six points of his harness up, the car is running and we’re off down the road. The steering’s straight, there are a couple of lights on the dashboard but the engine seems fine – miraculously the only real problem is a rather long brake pedal. Strong cars, these Suzukis. Half a mile later, after no more than half a dozen corners, we cross the timing beam. Will we still be second?

Not even third. The insanely fearless Mark Gamble has reeled in enough time after his puncture yesterday evening to snatch that away from us as well. So I’m left to sit and wait at the back of the queue going over the finishing ramp in Armagh. A hundred metres away, people are spraying what feels like our champagne.

I have to tell the story probably 20 times to different people, when all I want to do is be on my own. Everyone seems genuinely sorry for us, which is nice – most of them have been there at some point I suppose. Perhaps I should have noticed something, perhaps I’d switched off, perhaps I was getting tired. I ask Chris if he thinks I’d been going too fast just in case I’m in denial about how hard I was still trying. He says that if I’d been stupid and had still been attacking and taking risks he would have been telling me to slow down. And I know he’s right.

The one consolation as I sit here now is that no-one can take away the times we set through the day. And, as someone said to me afterwards, ‘you’re a proper rally driver now that you’ve rolled a car’. Even so, half a mile…