Rally Yorkshire saw Henry returning to the rough stuff, and taking time out to reflect on the role his plucky co-driver 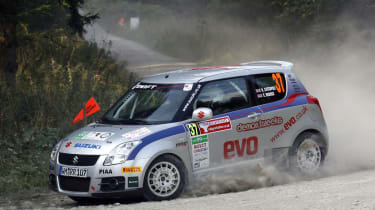 In many ways Rally Yorkshire seemed quite uneventful really. I say uneventful, but of course rallying is never truly uneventful. The stages in Yorkshire were butt-clenchingly fast and narrow. I remember that we had a rather large ‘moment’/near-death experience on SS4 after the front-left kicked up high in the air out of a deep pothole; when we landed there was a lot of braking and going sideways towards trees, but we stopped just short, reversed out and carried on.

We finished fifth, as much by staying out of trouble (relatively) as anything and avoiding getting a puncture until the last couple of miles of the last stage. It was a bit demoralising knowing before I’d even started that I wouldn’t be up at the pointy end of things like at the last couple of rounds, but with next to no experience on gravel I had to be sensible and keep telling myself that it’s alright to be learning as it’s only my first season (while using idle moments to try to think up ways to get that second season – any sponsors, benevolent benefactors or generous long-lost relatives please feel free to get in touch!).

It helps that rallying, especially on gravel, is a bit like golf (trust me on this) in that even if you don’t win, or even get close, there will still be at least one set of corners (or one shot) that feels just fantastic and will make you want to come back again and again to try to recreate that feeling.

The plan for Yorkshire was not to look at any positions or stage times but to just concentrate on trying to get quicker throughout the day. I enjoy the process of learning and in the days afterwards I tried to work out how I could have gone faster. Longer on the throttle, later on the brakes would obviously have helped, but I realised that I was approaching corners too cautiously. Whereas on tarmac I throw the car in, on gravel I found I was almost waiting until the car had neatly settled into the corner on the brakes before getting back on the power and driving out. It’s understandable because I’m not as confident, but I’ll have to work on it for the next round. Exactly how I’m going to work on it I don’t quite know, though!

Anyway, two of the stages, Staindale and Givendale, were repeated again at the end of the day and they gave a good indication that I’d grown some slightly bigger plums because we were three seconds a mile faster through both stages the second time around.

Now, I’ve been rather selfish over the past few rallies, getting all carried away with how much fun I’m having and barely mentioning the Fry to my Laurie, the Jeeves to my Bertie Wooster: Christopher Brooks.

You spend a long time in the car with your co-driver, so it’s quite important that you get on well. Chris is a nice chap. He’s an accountant, but I haven’t held that against him. He can text incredibly quickly without looking at the keys on his phone, which is slightly scary, but he can read a mean pace note, so I overlook that too.

He was brought up in the sort of village in mid-Wales where any boy that didn’t know the middle names of Ari Vatanen was instantly ostracised (Pieti and Uolevi for those that didn’t grow up there), so he has a wealth of rallying knowledge. For example, he told me that only three drivers in the WRC (Loeb, Hirvonen and Solberg) are actually paid to drive by the manufacturers; the rest have to bring independent backing. Which is interesting.

We have some slightly strange conversations during the road sections, my favourite from the Yorkshire round was as we passed the sign saying ‘Scarborough: University Town’.

‘You can’t really call Scarborough a University Town, can you?’ said Chris. ‘I mean, obviously, you can, but it’s a bit like putting tomatoes in a fruit salad.’

‘So the lesson here is don’t eat salad in Scarborough,’ added Chris confidently.

Chris told me that he didn’t have the money to get into driving, so co-driving was the next best thing. If he won the lottery I wouldn’t see him for dust apparently, but being good with numbers and pretty organised he says that he quickly found that he enjoyed the precise, almost managerial role of the co-driver. Whereas I don’t quite understand why anyone would be a co-driver. It seems a nightmare of a job and it’s often said that a co-driver can’t win a rally but he can lose one…

Long before the rally starts it’s Chris’s job to fill in the entry forms, order the pace notes, sort out accommodation, plan the recce and generally do all the things that I would leave until the last minute or just forget about entirely. It’s things like working out the fuel we’ll need for each leg depending on the miles we’ll have to cover and the predicted fuel consumption (3 miles per litre in stage, 5 miles per litre on the road sections) that would do my head in, but which don’t seem to phase Chris in the slightest. Before the recce he’ll ensure we’ve got our overalls, helmets, boots, etc to the team in time for scrutineering. He will have read the rules minutely so that he knows automatically what sort of regulations the rally is being run under and if there are any niggling little special requirements that could cost us penalties if we ignore them. On the recce he will be not only reading the pace notes out to me as we go through the stage but also furiously scribbling in co-driver shorthand any adjustments that I think need to be made. Back in service he will then collect the scrutineering card and take both of us through registration (nudging me when I need to sign something) before assessing any last-minute changes that might have been posted up and storing them in his planet-sized brain. Back in our accommodation he won’t go to sleep until he has inked-in all the crucial changes to all the pace notes, something which isn’t the work of a moment when you’ve got nearly 100 pages to go through.

In the rally itself Chris is like a sort of combined PA/satnav/ambassador/hat stand who controls everything that goes on. I’m just a driver and I don’t turn left or right unless he says so. While I’m busy drowning in my own sweat, grappling with my HANS device and trying to bring my heart rate back below 200bpm at the end of a stage, Chris is jovially dealing with all the marshals, making idle chit-chat and trying to make their day a little brighter. If I turn up to something within half an hour of the allotted time I think I’m pretty punctual, but Chris always knows to the nearest second when we can go into a control area. He knows when we have to leave service. He knows how long we were in stage just in case the timing equipment fouls up. He will check and double-check the time cards. He will talk to the other co-drivers, checking to see how our pace is through the stages.

By comparison, I do some driving. And that’s pretty much it. I sometimes drink some water and daydream a bit. At the end of a stage I chat to the lovely press people and tell them what a lovely time I’m having (until Chris tells me we have to go). If there’s a lull in all the pedals-and-steering-wheel stuff, and Chris says there’s time, then I might get out and stretch my legs. But only until Chris tells me we have to go again. I am literally under the thumb.

And, of course, Chris reads the stage pace notes, which is perhaps his most incredible skill (just ask Owen Brown, who had a crack at being my co-driver before Chris). Apart from the odd glance up, Chris will be looking down at the rows and rows of hieroglyphics, feeling his way through each stage and relating what he’s reading in perfect time to how the car’s moving. It’s an extraordinary and at the same time slightly queasy thought.

There was actually a bit more of a rest than usual in the Yorkshire pace notes because of a preponderance of hugely long straights where there’s not a lot to say. As we hurtled down these straights I would be concentrating hard  and gripping the steering wheel very tightly (although you really ought to hold the rim like you’re clutching a budgie), but to fill the lull in intercom communication Chris and I chatted about Strictly Come Dancing or famous rally drivers’ middle names. I occasionally released my vice-like grip to change up a gear, and eventually Chris would look down and calmly but firmly tell me that there’s a ‘hairpin right, slippy, rocks inside’ coming up.

And so it continued until the end of the final yard of the final stage, after which Chris guided us back to the service area, saw that the car ended up in parc fermé, gave me a damage declaration form to sign and went home. As Bertie said of Jeeves: ‘He moves in mysterious ways his wonders to perform.’