Ruf may be best known for its rabidly quick supercars, but it’s also prepared to think green, as the new electric-powered eRuf concept proves 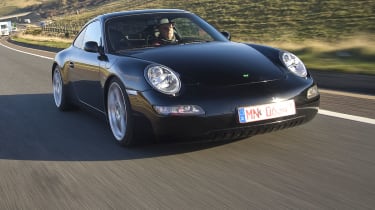 How weird is that? No flat-six rasp. We know modern 911s don’t bark like old ’uns, but this one blows by with barely a whisper. It’s no ordinary 911, of course. There’s a Ruf revolution in progress – this stealth fighter is powered entirely by electricity.

The eRuf, as it has been named, has been trucked over from Ruf’s Pfaffenhausen base near Munich but is now standing on the dockside at Dover. My mission is to deliver it to Axeon’s battery boys for a presentation in London’s Knightsbridge.

Externally it’s a typical Ruf take on a 997, and a quick glance inside reveals Ruf’s figure-hugging race-style bucket seats and conventional 997 controls and switchgear. Then you notice the additions. Ahead of the gearlever is a vertical panel of ad-hoc switches, knobs and plug sockets, all labelled in German, and there’s an on-off switch on the opposite side to where you’d expect to turn the ignition key. The reality dawns: this is very much an experimental prototype, and I am about to become a test driver.

The eRuf couldn’t be simpler to operate, though. Turn on the power; dip the clutch; engage sixth gear with the conventional-looking manual shift; take your foot off the clutch, then squeeze the drive-by-wire accelerator to move forward. And now you leave it in ‘sixth’, just like you’d leave an auto in ‘D’, and keep your left foot well out of the way – unless you need to select reverse, in which case you’ll need to dip the clutch pedal again. You really do need to discipline your left foot to stay out of the game, otherwise some electrical catastrophe will befall, as happened to an untutored hack who drove it in Germany and tried to use the gearbox normally. Clearly a productionised car would have long avoided the ambiguities of the prototype.

So I switch on, select sixth for forward, and gingerly apply the throttle. It’s like a milk float or dodgem: immediate motion. But less abrupt. I creep out of the harbour enclave and I’m immediately aware that power steering isn’t yet part of the package. So I haul it round the trundling traffic system and up high onto the A2 that surmounts the white cliffs. Time to explore the power potential. There’s a seamless surge rather than a typical Ruf-like blast. Foot to the floor, it doesn’t slap you in the back, but it’s certainly brisk. The brakes are more in character, seeming to be a two-stage affair, a steady ralentando then a sharp reining-in. Definitely part of the regular Ruf repertoire.

Hoping to get better acquainted at low speed, I drive the byways along South Foreland. On these twisty lanes you’d conventionally be going on and off the throttle to induce under- and oversteer to change direction, but the electric drive doesn’t seem to give you that, though eventually there’s a marked tendency to understeer. There’s no fingertip control at low speed; the eRuf has to be seized. Best get onto the open road.

Out of Dover the traffic falls away and I crank up the voltage. It’s uncanny. Acceleration is turbine-smooth and the car starts to reveal its character once you’ve got some velocity going. As I swoop up the long sweeping curves it’s as if I’m in a regular Porsche, for now it handles as you’d expect, inspiring confidence and taking command of the road. Eschewing the aural pleasures of flat-six engine revs modulated by gearshifts, you become a connoisseur of an entirely different cacophony: electrical whines and differing tyre noises that vary from tarmac to concrete. Presumably all wide-tyred vehicles supply the latter as an acoustic backdrop, but here it’s surpassed by the high-pitched whirr from the motor that increases and decreases in pitch not unlike the dentist’s drill.

Time to go for it. An even greater rush. It feels like there’s a lot more on tap after 180kph (110mph), and the eRuf is allegedly capable of 225kph (140mph). As I brake for a speed restriction it’s like switching the power off – it hauls down very quickly. So it’s at the top end where the eRuf really comes alive, then.

And that prompts the thought that, with different gearing, it could deliver greater urge low down too. Acceleration tests are planned, using various engine speeds for the electric motor to define its ultimate output and specification. Alois Ruf says that an overdrive system is in the pipeline to address that. ‘This motor only revs to 5000rpm,’ he says, ‘but a higher-revving one would give better acceleration.’

As it stands, with 1910kg and 201bhp, the eRuf isn’t a Bullet Train, but it certainly gives decent sports-car performance, accelerating quite adequately (0-62mph in 7sec) for something that’s stuck in top. It musters 479lb ft of torque from the off, and its burden is obviously the 550kg of lithium-ion batteries.

Electric cars are clearly part of the future, and Ruf is clearly on to something. But as well as refining the spec, there are a few practical issues to address. There’s zero carrying capacity for a start, as the normal luggage space is full of electrical apparatus that services the motor residing in the engine bay, and amidships the rear passenger space is completely taken over by a rectangular, carpeted box containing most of the batteries. And while the 80-mile journey from Dover to London may have exhausted only half their charge, fully replenishing the batteries takes eight hours. You’ll need a specific power socket in your garage, too.

Alois Ruf is a brave man. He plans to offer the eRuf as a production model by the end of 2009. ‘Emotion without emission’ is his catchphrase. Sure, the aesthetics and to some extent the driving experience are taken care of, but what of the charisma, the 911 personality that blossoms when you fire up a regular Ruf, or Porsche for that matter? Acceptance is a psychological thing. The eRuf requires that you banish those preconceived notions and memory banks of flat-sixes popping and banging and the blare of that glorious exhaust note. But just as manufacturers play with tuned exhaust notes, perhaps the eRuf’s options list might include the soundtrack of your choice…