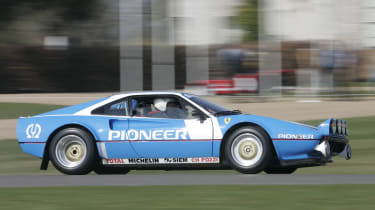 Every year, round about now, Goodwood previews its two big motor sport events, the Festival of Speed (on 3-5 July this year) and the Revival race meeting (18-20 September). A selection of machinery and drivers from both events gathers at Goodwood House with members of the press – and, naturally, the hillclimb is open for business. So, in bright sunshine, Lord March outlined the theme for the Festival (this year it's 'True Grit – Epic Feats of Endurance') and announced that Lewis Hamilton will be driving Ayrton Senna’s 1988 McLaren-Honda MP4/4 there in July. Damon Hill, Jacky Ickx and Jochen Mass were all there, while Rauno Aaltonen and Russell Brookes represented the rally world and its live stage at the top of the hill. Among other luminaries were Richard Attwood with his famous Porsche 917K and excessively tall model Jodie Kidd posing with a Gangloff-bodied Bugatti Type 57C coupé and a large poodle. The cameras snapped as 12 mini-skirted girls squeezed into a 1959 Mini, and the Ferrari 'Breadvan' and the 1959 Le Mans-winning Aston Martin DBR1 were among the many cars tackling the hill. Another was Toyota's Aygo Crazy. It was a chance drive for your correspondent, but sometimes things just work out. So it was that the Aygo and I joined the back of the queue for a full-bore blast up the hill, following in the wheeltracks of all kinds of tasty stuff. Off smoked a NASCAR Buick, off bellowed a McLaren M1B Can-Am car in original orange, off shrieked the new closed-canopy Caparo, and a whole lot more besides. Finally, me. The Aygo Crazy has been around for a year or so, but it's still an intriguing mutant. I have a secret liking for ultra-simple economy cars with tiny three-cylinder engines, cars which conform to the 2CV school of minimalism and momentum preservation. I've just had a new Suzuki Alto for a week and, while in no way a regular evo car, it's a hoot. The Crazy is more than a hoot, however. It's a one-off created by Toyota GB ('You've done what?' said Japan), beautifully made and fully functional. and under its stubby bonnet there no longer lies a tiny engine. Instead a 1.8-litre, 200bhp, turbocharged unit taken from an MR2 Turbo (a version we never got in the UK) sits where the rear seat used to be. Wheels are widened, arches are flared, air is scooped from the flanks, and there's no longer any power assistance for steering or brakes. All tactile barriers are down. Bumbling down to the bottom of the hill, the Aygo feels entirely docile. So it should; the engine is standard of its type, and so confident is Toyota of its lack of temperament that you can't even get to see it without undoing multiple screws. This is a no-user-serviceable-parts-inside sort of car. The turning circle is hopeless and the brakes need a very strong push, but that just goes with the territory. Harness clicked shut, helmet on, it's my turn. First a practice start on the tyre-warming strip just before the start line. Lots of revs, drop clutch… perfect. The tyres spin then bite, the torque comes in, the smoke hangs. Now, the real thing. The starting marshall's arm drops, I repeat the technique. Onlookers will later tell me it sounds fantastic, but what I'm hearing now is the staccato chirrup of the wastegate dunping the excess boost as I snatch second gear. This is great! Now third, and suddenly it's less great because third is not readily findable. Ah, here it is, we're back in the torque band and here's the first right-hander, the one on which the maximum number of people will witness any mistakes I might make. Brake – will the brakes ever bite? –  second gear, fine. Turn in. There are shades of Clio V6 here, a feeling of a large mass where you don't expect one to be in this shape of car. But the steering is crisp and quick, power flows to road, the Crazy hunkers down on the left rear wheel and now I've got to find third again. It's easier this time. Then fourth, shifting quite early because, unusually for a hot Toyota engine, it fades at high revs. Snick-snick through the twists, be annoyed that I didn't take the faster bends without braking even though I know from past runs up the hill that you can. And suddenly here's the summit. On the return run down the hill I'm following a D-type Auto Union, one of the cars that people forget when they say that John Cooper invented the mid-engined Grand prix car. To make that much commotion when travelling that slowly is an impressive feat. I get another run up the hill, and this time the clutch slips instead of the tyres so the getaway is less dramatic. All the corners are much more fluent, though, so the learning curve is still steep. Well, there you go. A crazy little car. Book your Festival tickets online at www.goodwood.co.uk.