The Bowler Nemesis, bred for the Dakar Rally, is the coolest 4x4 by far. We drive it on some suitably demanding terrain. And then take it shopping 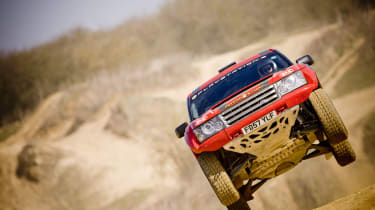 The Dakar rally. The most spectacular and gruelling motorsport event on earth. Competing vehicles have to ford rivers, scramble over rocks, wade through mud, jump metres in the air and race across billowing sand dunes, flat out, for days on end. Remarkably, one of the most successful manufacturers of these desert racers is based in a sleepy village in Derbyshire. Bowler Off- Road is the company behind the Nemesis, based very loosely on the Range Rover Sport, but with added warp drive.

We’ve brought this particular Nemesis to a disused quarry near Corby to see first-hand just what it’s capable of. It has already completed a number of events this year and the Twintex composite bodywork bears the battle-scars to prove it. Before the fun starts, the car shows its party trick of standing on one leg. The substantial sump-guard doubles as a quick jack – two hydraulic rams drop it down and the car is raised clear off the ground, perfectly balanced for very rapid wheel changes.

Despite its size, there’s no question this is a competition car. It exudes speed. The door is so light that opening it is like turning the page of a Sunday newspaper. I clamber over the side-beam of the hefty rollcage and fall into the deep racing bucket seat with all the grace of an octopus falling down a drain, but once installed I feel very comfortable if rather snug (since I’m over 6ft tall the fact that I fit at all is a pleasant surprise), and everything I need falls easily to hand or foot. The composite dash follows the approximate shape of the Land Rover item, but that’s where the similarities end. Both the driver and co-driver have a large LCD display for vital info: the driver gets a big rev-counter and a small digital speed readout plus a few other basics; the co-pilot gets all the critical data to worry about, leaving the driver to concentrate on winning the race.

Starting the 4.4-litre Jaguar V8 lets loose a savage bark from the race exhaust that echoes round the old quarry walls like the call of some primeval beast. The stiff, race-spec engine mounts transmit a tingling thrill of vibration through the car, heightening the sense of anticipation.

The Nemesis isn’t particularly tricky to drive, and being able to exercise it in something like its native environment is just the most fantastic fun. It thrusts forward with indecent speed, soaking up severe bumps and ruts as it charges over the moonlike terrain in a near deafening crescendo of mechanical aggression. It takes an off-camber jump with ease, firing the car seemingly straight up on a path to the stars before landing hard yet somehow gracefully on one corner, the long-travel suspension compressing with optimal control and allowing the power to be put down as soon as the car is on the ground again.

Turning hard into a corner, the Nemesis falls into understeer, but you can readily unsettle the rear and power out hard, flicking the back end out and steering on the throttle.

It’s clear though that this is a specialist tool for a very special job. It tackles everything the quarry can throw at it with overwhelming capability, drive optimised by the extremely trick differentials with viscous limited slip plus switchable air locking. The suspension is simply amazing, supple yet always in full control, allowing you to pick the exact line you want between the rocks.

This immense ability is testament to Bowler Off-Road’s exacting standards of engineering, honed over decades of working in the harsh world of competition. Indeed it’s been noticed by some of the world’s big movers and shakers, and a military version is on the cards with a machine-gun mount on top!

Never mind a military version, as I park the Nemesis it occurs to me that Land Rover’s great selling point is its everyday practicality, and as this car shares about 40 per cent of its DNA with a Range Rover Sport, I start to wonder how usable it might be as a road car. I bet no-one else thinks like me.

So I convince the chaps from Bowler that I need to take it on a run to the local shops. I suspect this is a first for them. Soon we’re heading out of the quarry onto some nice twisty B-roads, then into Corby town centre. On the road the car still feels absolutely wonderful, but in a different way: the Kumho race tyres are designed for grabbing lumps of the planet and throwing them rearwards; tarmac is not their preferred terrain, but they cope surprisingly well. In fact the car handles much like a sports car, the 40/60 front/rear torque split giving it a rear-wheel drive feel when powering out of roundabouts. There is less roll than I was expecting too, probably to do with the fairly low centre of gravity and the anti-roll bars helping the massive double wishbones. On mini roundabouts you can really feel the diffs working and on full steering lock the car shudders ever so slightly, though it might just be shuddering at the prospect of driving slowly up a high street rather than racing at full tilt through the dunes. The only tricky thing is the brakes, which are so powerful that at low speeds they can produce some accidental emergency stops, and the racing clutch, which combined with the lightweight flywheel makes it very easy to stall when queueing to get into the Asda car park. Well, that’s my excuse anyway.

I’m not sure if it’s the mud, the race livery, the sheer size of the thing or the exhaust sounding like the outbreak of war, but driving a full-on Dakar desert racer to a local supermarket certainly gets the attention of your fellow shoppers. Parking is straightforward enough, although reversing is made a little tricky by the lack of rear visibility since I have just the two door mirrors to work with and they’re covered in mud.

Unsurprisingly, people are staring as I open the door, twist the release buckle on the race harness and grapple my way out of the car. Now the next problem hits me; it’s a race car so it has no door locks. In fact it has no keys at all. Then again, the alien world inside the cabin would stop any casual thief. That and the fact that the chaps from Bowler have parked up next to it, so I nip into the shops to get a few essentials. On my return I ponder where to put my bags. As it turns out I’m spoiled for choice. There’s a parcel shelf, which usually houses the crew’s crash helmets and other race kit. The doors are hollow and normally used for storing documents and maps, plus the drinks and nibbles that are essential on desert rally stages which can last for hours. And for the weekly shop there’s the rear storage lockers, usually full of sand ladders, emergency tools and rescue equipment.

So there you have it, the surprisingly practical Bowler Nemesis. All it needs is an easier clutch and brakes, maybe an easier way of getting in and out, and probably some doorlocks, and I reckon it could make a seriously cool road car.

So the good news is that Bowler has decided to make a road version, the GT, with more refinement, comfy seats, an auto ’box option, air con and something called ‘infotainment’ (as I hold a race licence I have no idea what that means). The GT, currently at prototype stage, will give the sports-minded sheik most of the ability of the race car in an accessible, easy to use package, ideal for weekend dune-bashing or cruising the south of France. Can’t wait!

The heart of the beast is a Jaguar V8 with 450bhp in supercharged form. Jag diesels are also an option and gaining popularity. Gearboxes are six-speeders, either conventional H-gate or sequential. The differential options are open, LSD or the top- spec Ricardo visco LSD with air locking.

The steel spaceframe is immensely strong, not only to withstand the inevitable pounding but also to promote good suspension control. The Eibach dual-rate springs are tuned precisely for each car, and the massive race dampers use remote oil reservoirs to cope with the heat generated in severe use. The double wishbones all round allow up to 300mm of travel. The brakes are 360mm front discs with Brembo calipers and 350mm rear discs with Land Rover calipers; a brake bias valve allows the front/rear bias to be adjusted to suit the race conditions. A range of wheels and tyres are available but this car has Kumho 275/65-18 race tyres on Compomotive 18in race alloys.

Bodywork is made from a mixture of alloy plating and the composite ‘Twintex’ which is more durable than carbonfibre. It’s light for such a beast but the car is ballasted up in competition to meet the minimum 1800kg.