Silverstone may be about to lose the British Grand Prix but the 'home of British motorsport' has another major card to play: the Silverstone Classic 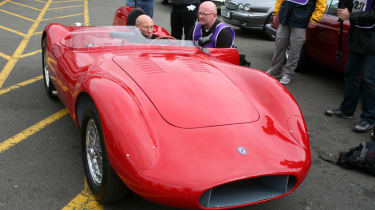 Silverstone may be about to lose the British Grand Prix but the 'home of British motor sport' has another major card to play: the Silverstone Classic. This year's event, running from Friday 24 July through to Sunday 26 July, features 15 different starting grids plus car club areas with a likely 4000 cars, a classic car auction, trade stands and two autojumbles, a Harley-Davidson 'village' and evening concerts from Blue and the Pussycat Dolls on Friday and latin-rock legend Carlos Santana on Saturday.   Among the races will be the Woodcote Trophy, a one-hour, two-driver race for pre-1956 sports racers. Sir Stirling Moss in his Osca FS372 is one notable entry. This race is organised by Motor Racing legends, which is also staging races for pre-1960 sports races and pre-war roadgoing sports cars.   The Masters organisation also has three races: one for Formula One cars from 1966 to 1978, one for endurance racers from 1964 to 1973 (cars such as Lola T70 Mk3 GT, Ford GT40 and F3L, Ferrari 512, Alfa T33), and the Gentleman Drivers' pre-1966 GT race with cars somewhat similar to those which race in the Goodwood TT.   Other races include a pre-1963 GT race (think Aston Martin DB4 Zagato and Ferrari 250GT SWB), one for 1903-to-1913 Edwardians including aero-engined behemoths, historic Formula Juniors, modified Minis, pre-1966 GP cars, pre-1960 production Jaguars and under-two-litre 1960s saloons (Cortina, Alfa GTA, BMW 1800 Ti and the like). And perhaps most exciting of all will be a re-run of an early-1990s BTCC grid from the time when the BTCC was at its height, racing for the David Leslie Memorial Trophy, and a Group C race.   Ace driver and evo friend Andy Wallace was on hand at the event's recent preview day to demonstrate the most dramatic car of the day, Don Law's Silk Cut Jaguar XJR9. Sadly your correspondent was denied the chance to sit next to Andy for some high-g ground-effect laps when a pitlane marshall took exception to the lack of a passenger seat belt (and meaningful seat, come to that), but I did have a ride in a 1910 Lancia racer with neither belts nor doors.   But not before Murray Walker donned a bus conductor's uniform and conducted a guided tour of the Silverstone GP circuit in the oldest Routemaster bus still running, helped by dry-witted past Formula One racer and latter-day historic combatant Jackie Oliver. With our slow omnibus lap completed, I climbed up onto Ken Prichard Jones' 1910 Lancia Tipo 55 driven by Nick Crewdson, and driven with a prudemt mix of verve and caution given the car's 99 years and beaded-edge tyres.   It's all about momentum conservation, and it's best not to rely on the brakes too much as they work only on the rear wheels. But the 3.0-litre four-pot chunters away with surprising gusto, driving through four very long-legged gears, and as I held on to the petrol tank or anything else handy, massively faster machinery hurtling past us at a rather lower altitude, I marvelled at the bravery of those who used to race these pioneering machines. This particular Lancia has quite a racing history, having won the Tiedemann Trophy in Savannah, Georgia in 1910.   Then I had three fantastically committed laps with ace historic racer Simon Hadfield, driving Lord Irvine Laidlaw's Maserati 250S from 1957. It's the only original 250S in existence, the other six having started out as 2.0-litre 200S versions, and it has raced continuously from new except when Lord Laidlaw was out of action with a back injury. Early pilots included Carroll Shelby and Chaparral founder Jim Hall, and it's amazingly original.   Cars like this remind you what a four-wheel drift really means. Hadfield guides it as much on the throttle as with the steering, braking firmly into a bend, aiming straight for the apex as he feeds in the power, then powering hard to the exit with the Maserati in a state of continuous, finely-adjustable yaw that a modern racing car just wouldn't adopt. It's automotive ballet of the finest sort, with minimal, measured inputs from Hadfield and a feeling of total confidence in the balancing of forces. Were we close to racing speeds? 'Given the weight of a passenger, yes, we were,' says Simon Hadfield. 'It's a lovely car to race.'   One thing missing from this year's Silverstone Classic will be evidence of huge corporate sponsorship. Ken Prichard Jones, director of Racing at Silverstone as well as the owner of that Lancia, explains: 'The entry charges, which are relatively cheap, will fund the event. We want to reach out to the younger generation, to encourage them to consider historic motor sport as a career. We're seeing the decline of a lot of industry but the classic car industry has escaped – it contributes £3bn a year to the economy – and we want to make sure it goes on for a long time.'   Visitors will be able to get up close to the cars and drivers in the paddock, and there will be a £10,000 prize for the best racing car display – not the shiniest, smartest car but the display that best shows the history. Under-16s get free entry to the event, and there will be a quiz for the most junior fans.   More on www.silverstoneclassic.com