This year's Gumball Rally was a mad, 3,000-mile dash across the US for the world's fastest cars 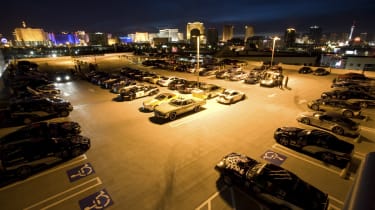 Car enthusiasts of a certain age will fondly recall the black Countach (and Adrienne Barbeau’s cleavage) at the beginning of the Cannonball Run movie. If you had told me back in 1981 that I would one day be participating in a similar event in a Datsun (the Nissan brand was unknown outside Japan back then) and what’s more a Datsun with 400bhp more than that Countach, I would have laughed in your face. And yet here I am, 28 years later, doing exactly that…

Like many of you, my only exposure to the Gumball 3000 Rally has been on TV and YouTube. Like me, you probably remember the notorious Ruby Wax BBC documentary on the 2001 event, in which many of the participants appeared to be ‘competing’ whilst still incapacitated from the previous night’s revelries.

And although officially there has never been a competitive or timed element to the Gumball 3000 Rally, it has often seemed that more than a few participants treat it as a race, with blatant disregard for their own or anyone else’s safety. Who could forget the driver of the white F355 Spider, registration L100ONY, who managed to flip it nose over tail multiple times across a ploughed field? Miraculously neither he nor his co-driver was seriously hurt.

Then there was the fatal accident involving a ‘civilian’ car in Macedonia in 2007. Once the initial media frenzy dissipated, independent reports ascertained that the Gumball car was doing no more than 47mph. But the damage to Gumball’s reputation had been done, and magazines like evo have steered well clear.

Until now. By chance I happened to meet Gumball organiser Maximillion Cooper (yes, that is his real name) at a car event in London earlier this year and he did a remarkable job of convincing me that those days were behind the Gumball and it was now run with the explicit cooperation of local law enforcement.

And yet I still couldn’t picture myself in the event, not least because of the 44,000-dollar entry fee per car – until a last-minute opportunity came up for me to co-drive an R35 GT-R. And not just any GT-R, but the ‘world’s most powerful’.

This extraordinary machine has been rolling-roaded at 750bhp at the wheels and been VBOX timed at 0-60mph in 2.72sec and 0-100 in 5.86. What’s perhaps most extraordinary is that it has completely stock engine internals and transmission. Which means that everything else has been heavily breathed on – turbos, intercoolers, injectors, fuelling and ignition maps, exhaust and induction, not to mention the various carbonfibre aero addenda. Right down to its 20in titanium wheels and Nitto Nt05 tyres, this is unequivocally the state of the tuning art.

Even when I knew the offer and the car were for real, I was still in a state of disbelief right up until the point where I walked into the Viceroy hotel in Santa Monica, Los Angeles, and my name was there on the list.

So where were all the braying toffs, the supermodels and the illicit drugs? In fact, I found myself sipping champagne with some very decent, honest car-nuts. Okay, so a couple had Veyrons and another had flown his SSC Ultimate Aero over from the UK specially, but fundamentally the thing they all had in common is that they were genuine enthusiasts, relishing the opportunity to spend a week driving across a continent with like-minded individuals.

Amongst the last to register was my co-driver and owner of the GT-R, ‘Long’ Jon Silva, whose boundless enthusiasm about his monster Nissan meant we soon got on. Although only 25, he is the marketing director for a number of tuning companies, most notably South Side Performance – SSP – who did the mechanical upgrades for ‘our’ R35, which was now parked in pride of place at the entrance to the Viceroy’s car park alongside the eclectic collection of metal, ranging from Maximillion’s matt grey XJ220, the two Veyrons and two Phantom Dropheads to a full-sized truck (minus trailer) driven by a Playboy Playmate and her husband.

That opening night’s party claimed the Gumball’s first casualty, as David ‘Knight Rider’ Hasselhoff allegedly ended up getting alcohol poisoning and was taken to hospital. The lightweight. The rest of us convened the next morning for a talk from the Chief of Police (basically, behave but have a good time), then we formed up at the starting grid next to Santa Monica pier. There was a large crowd of onlookers and with some of Santa Monica’s finest holding the traffic back on the famous Pacific Coast Highway, we launched through the tunnel and onto the first leg of our adventure.

I confess my first stint in the car on the drive to Las Vegas was mildly disappointing. I expected Jon’s GT-R to be terrifyingly fast whereas it actually only felt slightly quicker than my standard R35 back home. Jon sensed my disappointment and blamed the ‘shitty Californian gas’. Still, we made good time to the Hard Rock Hotel in Vegas and after a very noisy meal being serenaded by The Cult (yes, they’re still going) and a quick but profitable foray onto the blackjack tables it was early to bed.

Anticipating Sin City hangovers, the starting time the next day was pretty late at 11am and it was only a short drive to the mighty Hoover Dam. It was pretty hot in the queue to get down to the Dam and I was impressed with the GT-R’s ability to keep cool in 99degree temps. Strangely, the Texan Veyron (the other one was from Dubai) had to pull over to cool down despite its famed ten radiators.

Our next route card directed us to Sedona, Arizona. And that was when disaster struck. It was thankfully during one of Jon’s stints when there was a loud thump underneath the car as if we’d run over something, the carbon bonnet jerked upwards slightly and a loud rubbing sound came from the front of the car.

The lovely carbon front splitter had come off and was dragging on the ground, held on by just a couple of rivets. Almost immediately a fellow Gumball car pulled over to help; an Infiniti Coupe driven by Dave and Darren Mauch. Darren was immediately on his back on the hot gravel, removing the damaged splitter and skilfully tie-wrapping the unsupported undertray to keep it from catching the airflow and dragging on the ground.

Which just left the problem of how to take the splitter with us as it was too big to fit in either car. Eventually we flagged down the massive Monster Energy Drink sponsored Winnebago driven by snowboarding champion Danny Kass. They had room to spare and happily agreed to take the splitter on to Sedona.

Next morning, the Gumball crew helped locate a local workshop which could help re-attach the splitter. Even better, we found some decent gas and Jon put a squirt of octane booster in too. Immediately the car felt transformed, vastly more alert and responsive, the engine pulling like a locomotive with that uncanny GT-R feeling of it getting faster in each successive gear, while the cat-less titanium exhaust released a fabulous V6 yowl.

Just a few seconds of sustained acceleration had us up to unprintable speeds – and then we rounded a corner of the highway and saw the Texan Veyron and two Porsche Turbos not only pulled over by the cops but with recovery vehicles turning up to impound them. (We later learned they’d touched 200mph moments before and were slowing when they were zapped. All three were caught at 176mph and carted off to the cells. The Texan owner of the Veyron got his lawyers involved, managed to get a judge to see them immediately rather than later in the week and they were released around midnight.)

Suitably sobered, I eased the speed back down and set the cruise control at what I thought was a reasonable 89mph whilst keeping an even more alert eye and ear on our Valentine 1 radar detector. Unfortunately, one of Arizona’s Highway Patrol was a skilled hunter and hid his interceptor behind an overpass pillar; when we were less than 100 yards away he zapped me with instant-on radar which gives no warning. As soon as the Valentine 1 blared, I knew he had me and watched with resignation as he turned onto the road behind us and put the dreaded red and blue lights on. After warning me that I could have been facing jail, I got off with a standard ticket that subsequently cost me $371. I let Jon take the rest of the stint to Santa Fe…

The next day’s leg was a long schlep to Dallas, well over 600 miles and it did not start well when I spotted a large oil leak underneath the engine. Jon was very nonchalant about it and simply topped it up with fresh Mobil 1, but when I noticed blue smoke and a fluctuating oil pressure gauge, I insisted on pulling over. To our horror, the dipstick didn’t even register and we decided the car had to be trailered to Dallas, Jon and I cadging a lift in a Hummer H2 being driven by a trio of cheery Kuwaitis.

Thankfully the leak turned out to be the (stock) oil pipe feeding one of the turbos that got damaged when the splitter was ripped off. Jon worked on the car himself in the multi-storey opposite our hotel and the car was shipshape a couple of hours later.

‘Megazilla’, as we’d christened it, then ran faultlessly for the rest of the rally. And what a blast we had, as our petrolheaded convoy progressed to New Orleans and then on to Orlando and finally into Miami, where we had a police outrider escort all the way to Ocean Drive. By fluke we ended up being the third car to reach the last checkpoint.

So was it the irresponsible danger-fest of legend? Not really. A few competitors got bored in a traffic jam and decided to let some fireworks off out of the back of their SUV. The police treated it as a terrorist event and locked them up, though they later rejoined the rally – in their prison uniforms, naturally.

And of course there was plenty of ‘spirited’ driving, but the fact that we were all wearing great big target signs in the form of Gumball stickers helped keep speeds down. Inevitably I did pick up another ticket, this time in Florida, but the real danger from this rally was it opened my eyes to how tough and mod-friendly the R35 is. My credit card won’t know what’s hit it…