We look at the Germany's Nurburgring circuit, the vision of Dr Otto Creuz 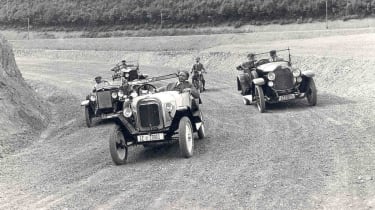 Nothing like it would get built today. In fact nothing like it has been built since. A race track more than 17 miles long with over 170 corners and draped over a mountainous landscape that would see it rise and fall by almost 1000 feet a lap. But back in the mid-1920s that was the vision of Dr Otto Creuz, a member of the district council in the Eifel region where just such a circuit would soon be built.

At the time Germany lacked a purpose-built race circuit. The ADAC automobile club ran its annual ‘Eifelrennen’ races for both cars and motorcycles on public roads in the Eifel mountains but found this arrangement far from ideal, particularly on safety grounds, so it was understandably keen to support Dr Creuz. The mayor of nearby Cologne was keen too, as, like Creuz, he recognised that such a project would help bring employment and prosperity to a deprived region. It would also make a perfect test facility for Germany’s burgeoning automotive industry, as well as serving as a showcase for the country’s engineering and racing talent. Altogether the case was strong enough to convince the German government to invest some 15million Reichmarks in the scheme.

Construction of the new circuit began in September 1925. Over 3000 workers would build the new road through the mountains, which would take its name – ‘Nürburg-Ring’ – from one of the four small towns (Nürburg, Quiddelbach, Herschbroich and Breidscheid) that it would encompass. In fact there was not one circuit but two. The largest was the 14.1-mile Nordschleife, or ‘North Loop’, while linked to its southernmost point was the 4.8-mile Südschleife (‘South Loop’). Not only would this cater for events of different sizes, but both loops could be used together, creating one giant 17.6-mile track.

It was on this combined layout that the first races – the Eifelrennen – would take place at the Nürburg-Ring on June 19, 1927. The sports car race would be won by the German Rudolf Caracciola, who would soon become recognised as the first Ringmeister (‘Ring master’), the unofficial title bestowed upon those who mastered the complexities of this hugely challenging circuit. Others would have the chance to acquire the same accolade over the coming years, and they would include the most talented drivers in the world, as just a month after the Ring opened it became the home of the German Grand Prix. But you didn’t need to be a racing driver to have a go: when it wasn’t in use for racing or testing, the Ring was opened to tourists as a one-way toll road.

The circuit proved immensely popular. During the 1930s, crowds as large as 350,000 turned out to see German cars (Mercedes, Auto Union) and German drivers (Caracciola, Hans Stuck, Bernd Rosemeyer) dominate. After the Second World War, with Grands Prix now using only the Nordschleife, new Ringmeisters like Alberto Ascari and Juan Manuel Fangio would come to the fore.

As technology progressed, the cars became faster. The 60mph best average lap speeds of the late 1920s would rise to over 100mph by the ’60s, and this would bring new problems. The bigger speeds were making the circuit more dangerous, a problem amplified by the fact that in many places trees and hedges were now growing just feet from the edge of the track. Jackie Stewart would later call it ‘The Green Hell’…

Improvements were made after F1 drivers boycotted the track in 1970 – Armco was installed, some of the worst bumps were flattened, some of the nastiest corners re-profiled. It made the track even faster. In 1976 Ferrari driver Niki Lauda proposed boycotting the Nürburgring again, but failed to gain enough support from his fellow drivers. He was, of course, right to be concerned. A suspension failure on his Ferrari during the race would lead to the fiery accident that very nearly cost him his life.

Formula 1 would not return to the Nordschleife, but it would return to the Nürburgring in the mid-’80s, when a new, 2.8-mile Grand Prix circuit opened, replacing the original Südschleife. Short, wide and safe, it’s everything a modern racetrack should be, but it still lives in the shadow of the Nordschleife next door, which still plays host to races (if not F1), is still used by manufacturers for vehicle testing, and is still regularly open to the public. As tests of car and driver go, it’s yet to be bettered.