From the Engine of the Year to the plumpest, most oven-ready Turkey of the Year, here’s the very best – and the very worst – of the last 12 months 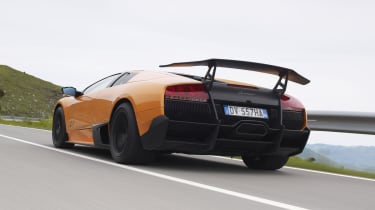 MOST SURPRISING 0-60 Winner Panamera TurboA two-ton saloon that sprints to 60 in 3.6sec, leaving the likes of the 911 GT2 behind.Runner-up Focus ST Mountune0-60 in 5.8sec was impressive enough; even more so because it was 0.2sec faster than the supposedly more hardcore Focus RS.

THE ‘HURRY UP AND BUILD IT’ AWARD FOR BEST CONCEPTWinner VW BlueMotionNeat design, promising mid-engined dynamics. The future of fun, affordable sports cars looks bright again. Come on VW, push the button!Runner-up Lambo EstoqueUnmistakably a modern Lambo but somehow not as contrived as Aston’s four-door DB9 or Porsche’s bloated 911.

SCARIEST CAR OF THE YEARWinner Caterham levanteFamiliar Caterham Seven surroundings rendered utterly unfamiliar and horrendously skewed by immensely potent and snappy 500bhp V8. Lapping Bedford is heart-in-mouth stuff, and it’s almost a relief when it gets stuck in third gear. Not so much driving on the edge as clinging to it by the fingernails.Runner-up Riding with Eikhorn Rural T-junction. Bentley Continental Supersports. 621bhp and 590lb ft of torque plus Engineering Director Ully Eichhorn. Full-bore standing start. Turning sharp right. No, this isn’t happening. Oh yes it is. Holy crap.

TECHNOLOGICAL INNOVATION OF THE YEARWinner Nissan 370Z downshift blip thingIt sounds wrong to enjoy a system that takes away the need for a driving skill but we love the way the 370Z automatically gives exactly the right heel’n’toe throttle-blip as you change down. It selects just the right revs on upshifts too, and so smoothes out every gearchange.Runner-up Porsche paddlesNow available on the PDK (twin-clutch) 911 Turbo. Hell, these paddles are so simple and intuitive – pull the left one to shift down, the right to shift up – they might just catch on.Honourable mention IFR Aspid’s brakesTake some spindly discs that look like they come from a mountain bike and use them to stop a car (the amazing Aspid, evo 126). Incredibly, not only do they work once, but again and again.

TURKEY OF THE YEAR Winner BMW X6 MRemember the nimble, delicate E30 M3? Looking at the fat-arsed, over-powered, dynamically inert X6 M, we wonder if anyone at M Gmbh does. Or if anyone there recalls declaring they’d never make an M car with four-wheel drive. Or an autobox. Or out of an SUV.  Runner-up Porsche Panamera TurboThere’s so much cleverness going on with the Turbo’s trick four-wheel-drive chassis that the engineers forgot to make it good to drive.

BEST MOTORSPORT MOMENTS1. Brawn’s Supremacy: driver’s title for Jenson, manufacturers’ title for the team. 2. Fisi and Force India at Spa, giving Ferrari a run for their money.3. Max receiving a horsewhip as a leaving pressie from UK hacks.4. Rossi getting the better of Lorenzo on the last corner of the last lap of Lorenzo’s home GP. in Barcelona

RAY CHARLES DESIGN AWARDWinner BMW 5-series GTThey probably never saw it, but here in the UK we had this car called the Rover SD1. It was the same concept; only difference was it looked good. Mind you, that was 35 years ago…Runner up Jaguar XJ (rear three-quarters view)OK, Maser’s gorgeous Quattroporte is hard to better, but the big Jag doesn’t even come close

TECHNOLOGICAL FLOP OF THE YEARSmart FourTwo EDAn electric Smart sounds like a good idea, but the ED most certainly isn’t. It took 6.5sec to get to 30mph and struggled to a 60mph top speed, but worst of all it used 22 per cent of its battery life on a mere six-mile trip to our local Tesco. ‘Quite possibly the most hopeless test car evo has ever had to endure,’ we wrote.

DISAPPOINTMENT OF THE YEARLoser Corvette ZR1We’re fans of the Z06 and expected to love the even more potent ZR1. Sadly, each corner of the test car’s chassis (evo 133) felt like it was trying to take the car in a slightly different direction. Worrisome with so much grunt.Next worst Audi TT RSGlorious five-pot engine, sharp looks, decent grip. But dreadful steering. Variable assistance allows it to be wrong right across the speed range, corrupting the dynamic feel of the car entirely. A major fumble. Dishonourable mentionsAlfa’s Mito and the Abarth 500 EsseEsse were also vying to underwhelm us, while the 370Z  didn’t move the 350Z’s game on like we hoped it would. Except for that throttle-bip thing…

MOST EMBARRASSING MOMENTDobie crashes the Grand Challenge BMWDriving the teabag-like 325i Cabrio up a greasy slip-road, young webmeister Stephen Dobie discovers the BMW’s legendary tail-happiness first hand. It’s the second handful of oppo that defeats him, as it whips back the other way. The Armco is barely grazed but the 325i is a write-off.  Team-mate Marriage sees the funny side, eventually…Runner-up Porsche bosses  Well before the unveiling of their new saloon, Stuttgart suits use undisguised Panameras to attend the Geneva show, neglecting to inform the PR department of their actions. Result: as soon as word gets around, hundreds of hacks leave the show to find the car park and take lots of photos. Oops.

OVERHYPED CAR OF THE YEARWinner Toyota iQ. Nowhere near as clever as it thinks it is.  A Smart is still smarter, and a Citroën C1 makes more sense than either of them. At £11K the iQ is hardly the new People’s Car.  In fact they may as well stick an Aston grille on the front and be done… Eh? They’ve done what?Runner-up Ford Focus RSIt’s a good car, but under all the pseudo WRC Focus arch blisters and wings and splitters and nuclear green paint, it’s not so different to the slightly chubby, likeable ST, which is a lot less embarrassing to be seen in.

THE 'PLEASE DON'T BUILD IT' AWARD FOR WORST CONCEPTWinner Aston Martin Cygnet The sequence runs something like this: Wolseley Hornet, Panther Rio, Mitsuoka Viewt, Aston Martin Cygnet (pictured below). Didn’t anyone tell them the Ugly Duckling was a cygnet…Runner-up  Aston Lagonda Sneakily revealed at an un-Godly 8am on the day after press day at Geneva (and pictured in evo 130). From the winces and audible gasps from those who’d made the effort to be there, you’d have thought Dr Bez had belly-flopped into a paddling pool, dressed as a Smurf.

IT COSTS HOW MUCH? The Losing the Plot AwardWinner Brabham Racing BT92 Take a lovely BMW M3, super-size the wheels, balloon the arches, massage the V8 up to a stonking 500bhp and give it an evocative badge. Then attempt to charge five times the list price, for a car that doesn’t hang together as well as the original. That’s the £250K BT92 (evo 131).Runner-up Lexus LFA (£340K)Unusual coupe sty… IT COSTS HOW MUCH?! Trick  V10 engine produ…IT COSTS HOW MUCH?! Limited production, ju… IT COSTS HOW MUCH?! Yup, however good it is, there’s no getting past that ludicrous price-tag.Not forgetting the… Nissan GT-R V-spec – twice the price of a normal one, possibly because they’re selling the normal one at half what it costs to make. And finally, Porsche’s Cayenne Diesel – not the cheapest Porsche but the cheapest trick to part badge snobs from their cash. BMW X6 M – Only rich bullies with small cocks need apply

CAN'T BUY ME TASTE AWARDWinner Marangoni MitoIn the insect world, bright colours say ‘Don’t eat me, I taste horrible.’ In the car world, with its insect-wing doors and red tyres (honestly, I’m not making this up), the vivid Marangoni Mito shouts ‘Move along, please, I’m tasteless.’ Runner-up Mansory ChopsterA chopped-roof, carbonfibre-clad Cayenne with Dukes of Hazzard-esque stripes (page 29, evo 130 if you really need reminding). Makes the mouth water… like it does just before you heave so that the vomit doesn’t strip the enamel from your teeth.

ENGINE OF THE YEAR

The cylinders are squeezed close together, which makes the cylinder walls thin, but the block is tough enough to cope with the forces involved because it’s made from extremely strong vermicular graphite cast iron, used up to now only in some diesel engines. Those forces include 335bhp on a plateau between 5400 and 6500rpm, and 332lb ft all the way from 1600 to 5300rpm.

The block has its origins in a US-market VW Jetta engine, but the 20-valve cylinder head is derived from those of Audi’s (and Lamborghini’s) V10. In the TT RS, the head incorporates pneumatically-controlled flaps in the inlet ports designed to generate swirl in the intake air under light-load conditions, thus ensuring the best distribution of the fuel as it is injected into the still-tumbling air within the cylinder. Direct-injection engines can always run at a higher compression ratio than port-injected engines, because the injected fuel has the effect of cooling the charge of air when cooling is needed the most, but this swirling system ensures this cooling effect spreads throughout the cylinder.

High compression (a ratio of 10.0 to one in this case) means the engine pulls well off-boost, so Audi can use a big turbo without much evidence of lag. Variable timing for both inlet and exhaust camshafts, rare in a turbo engine, helps with low-end pull, while full turbo boost is a hefty 1.2bar. So not only is the specific output impressive at 135bhp per litre, it’s delivered in a crisp, even torrent of energy right across a huge usable rev-range. And being a five-pot, with an exhaust bypass valve for maximum sonic effect, it sounds fantastic with a deep, harmonic, warbling note which takes you right back to a 1980s forest rally stage. All that energy squashed into the snub nose of an Audi TT. Amazing. Runner-up Porsche GT3 3.8Most new 911s have the all-new, direct-injection engine. Not so the GT3, whose 3.8-litre flat-six is still a direct descendant of the the original 911 motor from 1963. Obviously it’s water-cooled and has four overhead camshafts instead of two, and it has just gained variable valve timing for its exhaust camshafts to complement that for the inlet camshafts. But the basic design of the crankcase, and of the dry-sump oil system, is pure historic 911.

Ultra-fine electronic control of cams, injection and ignition is what makes the GT3 engine’s attributes possible. It has a 12.0 to one compression ratio yet uses conventional indirect injection. It produces 450bhp and 317lb ft yet meets Euro V emissions. It has titanium con-rods and can rev to 8500rpm, a crankshaft speed with which Porsche’s new direct-injection system can’t cope. That’s why this most potent of non-turbo 911 engines is still the old one. Drive it, hear it, feel it to discover why it’s also the best. Honourable mentionsAlso worthy of note this year, the Jaguar XFR/XKR V8, which can give you effortless cruising or tyre-smoking, torque-saturated joy to the beat of a free-flowing exhaust. Then there’s the Lexus LFA’s V10. And we couldn’t ignore the last hurrah for the Lambo V12 in the Murcielago SV. In this final form the V12 has never felt more potent or sounded more menacing.

After all this blood and thunder, Alfa’s 1.4-litre MultiAir turbo unit seems worryingly sensible. But it’s a radical reinvention of the petrol engine with inlet valves controlled not by a camshaft but hydraulic pistons. Result? Strong torque and 167bhp with ultra-low CO2. The future’s bright. JS