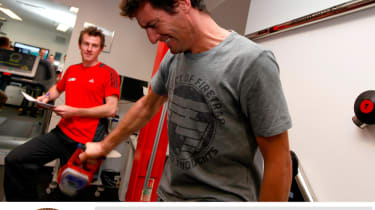 We know that Modern F1 drivers do a phenomenal amount of fitness training, but going to a gym and eating steamed vegetables aren’t crucial to driving a car quickly. They’re not even crucial to racing a car very quickly - just look at the late, great Gerry Marshall (although I think even he would have accepted that an F1 car was beyond him).  Unless you’re driving a Caterham, even power to weight ratios aren’t exactly going to be harmed if you dine under the golden arches every night. So why are Andy Blow, Eliot Challifour and Pippa Alford trying to coax ordinary evo sort of people into their gym/lab in the Porsche Centre at Silverstone?

Well, consider the following situation: You’ve taken the days off work and driven all the way out to the Nurburgring. You’re excited and slightly nervous about driving the Green Hell. You’ve paid to join an RMA trackday so there’s unlimited lapping for a whole day, possibly two. It’s a glorious morning. You go cautiously round the first lap, looking intently, trying to take it all in. You stay out for a second lap. A bit faster this time as you get a feel for the car and the surfaces. But by the time you reach the Karussel for the second time you’ve been concentrating with every fibre for quarter of an hour. You’re sweating so that your shirt sticks to the seatback, you’re forearms are starting to ache with the exertion and you’re suddenly not really enjoying yourself. Worse still, you’re concentration is declining, you’re getting momentarily distracted and you’ve just missed two apices by a country mile, all because as your physical fitness deteriorates, so does your mental fitness.

At this point, if you’re sensible, you’ll short shift, ease back and tour round the rest of the lap keeping an eye on your mirrors and off the racing line. If you make the wrong choice and push on there’s a fair-to-middling chance you’ll crash at Wipperman. Pflantzgarten if you’re lucky. If you’re driving something twitchy and fast then obviously the stakes get higher still. So, being fit can help you enjoy a car. But just how fit do you have to be? What sort of fitness do you require and what can you do to improve? We had a running race from one side of the evo car park to the other and the first and last people to cross the line were packed off to the Porsche Human Performance Centre for the afternoon…

Metcalfe looks nervous as he sees the treadmill. I then look crestfallen as Andy Blow reassures Harry that he’s not going to have to get on it. First Harry and I both undergo a basic ‘Wellness Check’, which is available free to anyone picking up their new Porsche from the centre. It determines body composition and measures heart rate, blood pressure, glucose and cholesterol levels. Then, while the results are being assessed to see how long Harry has to live, we move on to the more fun tests for reactions.

The BATAK Accumulator is a bit like a fairground game. Big buttons are spread spread high and low across a wall and you have to hit them as they light up. It tests your peripheral vision, sensory-motor reactions, and proprioception (appreciation of where limbs/parts of the body are in space). The aim is to get as many as you can in a minute. Harry scored a very respectable 60 and I managed 74. To put this in perspective, however, Heikki Kovalainen jointly holds the world record at 121.

The second and smaller machine is called a Saccadic Fixator. Although it again involves pushing buttons that light up, this one is more precise and tests accurate hand-eye coordination and reaction times. The first test shows that Harry and I both have average reaction times at around 0.7 of a second (although mine would have been quicker if I was more accurate – weirdly I took two stabs to hit the button). The second test on the Fixator involves chasing randomly illuminating buttons around a screen as they get faster and faster. Scores were more encouraging here.

After that Harry had a rest and I laced-up my trainers and prepared to get stuck into the rest of the Motorsport Assessment to see how my fitness compares to a top-flight driver. This is not just speculation either as in the past Andy has trained Mark Webber, Fernando Alonso, Jarno Trulli and Jenson Button.

First up is the aerobic fitness test, based on running or cycling. I will admit to having done the odd bit of training for this sort of thing, but nonetheless I’m shattered when I get off the bike after half an hour. It involved cycling on a static bike and constantly increasing your power output by another 25watts every three minutes until you can go no further. Your heart rate and the build up of lactic acid in your blood are measured throughout. I was pleased with the results, but having to contemplate then doing chin-ups (overhand, long arm), press ups (all the way down and none of that bum in the air cheating allowed), a grip test (very important for drivers) and a flexibility test is agonising.

By the end of the day Harry and I had a full print out of the results, some of which you can see below. What did they show? Well, I might be relatively fit, but I’m a long way off the reactions of an F1 driver, partly because I’m not superhuman, and partly because if you spend at least half a month driving a laptop instead of a single-seater then your reactions will naturally be duller. You can pep them up by playing sports like squash or even using a cheap reaction ball (basically a ball that bounces randomly making it hard to catch) occasionally.

Harry admitted that he would have just ignored his health were it not for the assessment and since his results (which weren’t terribly encouraging) he’s taken a few steps (like not having cream in his morning coffee!), which have made him feel a whole lot better. He describes himself as being like an unserviced car that’s had fresh oil and a new air filter. So, whether you’re a budding Vettel or a slightly tubby trackday warrior, it’s probably worth looking after yourself as well as you look after your car.