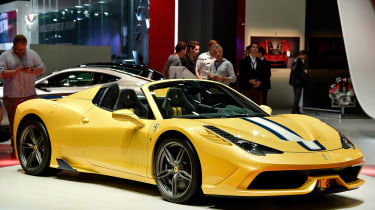 Ferrari will build just 499 examples of its 458 Speciale A, for ‘Aperta’ – Italian for ‘open’.  You’re unlikely to see one on the road then, but everyone else, the most powerful spider model ever to leave the gates at Maranello will make its public debut at the Paris Motor Show.

Ferrari says the 458 Speciale A is a celebration of the ‘dazzling success’ of the 458 line and its numerous on- and off-track awards, including two championship victories in the World Endurance Championship and class wins in prestigious races like the 24 Hours of Le Mans, the 24 Hours of Daytona and the 12 Hours of Sebring.

Like its hard-topped Speciale counterpart, the Aperta is defined by its engine – a 597bhp, 398lb ft naturally-aspirated V8, thrice acknowledged as Best Performance Engine in the International Engine of the Year awards.

Sent through a seven-speed dual-clutch transmission, there’s enough power to propel the 1340kg Ferrari (plus fluids and a svelte driver) to 62mph in three seconds dead. Keep the right pedal pinned and 124mph passes in 9.5 seconds.

The Aperta’s dry weight is just 50kg greater than that of the coupe, thanks to the light weight of its aluminium retractable hard top. Prod the button and deployment or retraction takes 14 seconds, allowing even greater access to the V8’s wail than drivers of the coupe.

The Paris car will premiere in a unique colour scheme, draping a Blu Nart and Bianco Avus stripe over bright yellow paintwork. Grigio Corsa-coloured five-spoke forged wheels complete the look, though it’s fair to say owners will be able to select their own unique combinations.

Inside, Alcantara seats with contrast stitching and a ‘3D technical fabric’ join a striking blue carbonfibre dashboard finish. Again, interior shades will likely vary with owner discretion. As for pricing, Ferrari is keeping that quiet for now. If you have to ask...