Ferrari has released some images of the stunning new 458 Spider, which will make its debut at the 2011 Frankfurt Motor Show 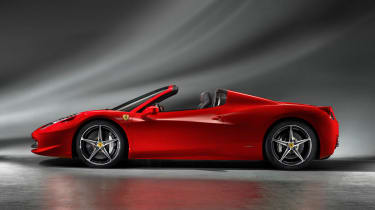 Ferrari has released images and details of the new 458 Spider ahead of its debut at next month’s Frankfurt Motor Show.

The roof is where it gets interesting, with a clever folding aluminium hard top. None of the pictures released show the car with its roof in place – one of our images is an internet rendering based on Ferrari’s patent application – but we know that it’s a two-piece system that’s claimed to be 25kg lighter than a conventional soft top, and which – when folded – is stowed in front of the Spider’s engine bay.

It’s set to be more practical than Ferrari’s previous mid-engined roadsters, too. The small space needed for the folded roof has enabled Ferrari’s designers to include what’s described as a ‘generous rear bench for luggage’ behind the seats. There’s also an electrically adjustable rear wind stop that rises between the faired rollover hoops – similar to that of the Audi R8 and Lamborghini Gallardo Spyders. Ferrari says this allows ‘normal conversation to be held even at speeds of over 125mph.’

We’ll get details of pricing nearer to the car’s UK launch next year.

Video of that new roof in action...