Images of the one-off 512 Boxer inspired Ferrari, built for guitarist Eric Clapton, have been released. 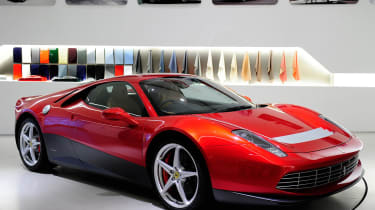 Ferrari has released images of the SP12 EC, a one-off supercar commissioned by Eric Clapton. Based on a 458 Italia, the new car pays homage to the 512 BB, Clapton’s favourite Ferrari, having owned three of them over the years.

Built from 1976 to 1984, the 512 featured a mid-mounted 360bhp flat-12 engine, derived from the Daytona’s more conventional V12, and mounted above the car’s gearbox. The early pre-injection 512s notably featured a two-tone paint finish, which has been recreated to some extent on the new SP12, as well as a number of many 512BB-inspired details.

Designed by the ‘Centro Stile Ferrari’ in collaboration with Pininfarina and engineers from Modena, and is a truly unique proposition. It uses the 458’s standard 570bhp, 4.5-litre V8 engine, and is the latest in a line of one-off Ferraris, following on from the P4/5, ordered through Ferrari's 'One-Off Programme'. Clapton is reported to have spent more than £3million building his dream Ferrari.