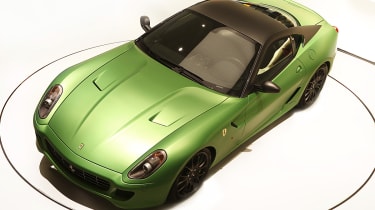 Last week evo went behind the scenes at the Ferrari factory to meet the engineers whose job it is to create the Ferrari road cars of the future. As they told us, it’s a task that’s got much harder recently. Rather than simply design ever more exciting supercars to tempt potential customers, they now have to engineer cars that are capable of meeting the draconian CO2 legislation about to be introduced by the EU. After looking at all the existing engineering solutions (reducing frictional losses in the engine, fitting tyres with lower rolling resistance and aerodynamic tweaks to reduce overall drag) the conclusion was that if they stuck with conventional drivetrains, then Ferrari could only reduce its overall CO2 emissions to around 260g/km. This in itself is a huge drop compared with the 430g/km fleet average Ferrari had in 2007, but some way short of the 140g/km fleet target set by the EU for 2014. If a manufacturer fails to meet this average then Brussels will be looking to introduce an undisclosed penalty, which will no doubt lead to higher prices for consumers in years to come. Ferrari needed to go back to the drawing board and the result is a programme to develop petrol/electric hybrid technology for all its road cars in order to meet this 140g/km target. Hybrid offers Ferrari the best solution because it leads to a dramatic reduction in CO2 emissions – and it’s all thanks to the way the EU CO2 emissions test is carried out. As we all know, Ferrari engines are designed to be very high revving and work at their most efficient at much higher revs than most conventional engines. Trouble is, this is a distinct disadvantage when it comes to the official CO2 test, which demands a lot of stop-start running and glacial acceleration for much of the test. By developing a hybrid, much of this low-speed running can be done on electric only power, leading to a dramatic improvement in CO2 emissions as a result. But the cars still need to be exciting. Next task was to use the new hybrid technology to enhance the driving experience as well as reducing emissions. So, behind the scenes, Ferrari has transferred the engineering team who were working on the ‘KERS’ technology in F1 last year over to the road car side of the business. The result - the new 599 HY-KERS experimental car – gives us an insight into their current thinking.  The 599 HY-KERS is fitted with a seven-speed DSG gearbox with a 100bhp electric motor integrated onto the rear of the gearbox casing, capable of both powering the car purely under electric power or giving a 100bhp boost for ultimate acceleration, whenever the driver demands it. The electric motor is connected to the drivetrain via one of the two clutches controlling the gearbox and can also be used to generate electricity when the car is de-accelerating. Electricity is stored in two slim-line lithium-ion batteries, hiding under the floor of the passenger compartment but covered by the aerodynamic bodywork.  The result of all this technology is that the 599 HY-KERS not only hits the CO2 targets but can post a 10.4sec time for 0-200km/h (0-125mph), compared with 11sec for the standard 599. What’s more, this hybrid drivetrain could be fitted to all future Ferraris if required. Who said hybrid cars were boring?