In the Noughties, Porsche and Ferrari went head-to-head with rival 600bhp-plus, 200mph supercars. Roger Green gets reacquainted with Carrera GT and Enzo - and finds out which has stood the test of time best 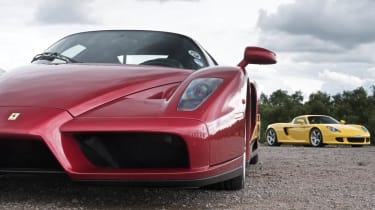 Boy, I don’t think I’ve ever been quite so popular. The large crowd emerged – seemingly from nowhere – the instant the cars were disgorged from the delivery trucks and dropped onto the concrete scrutineering apron of the Rockingham Motor Speedway, and now we’re surrounded. Some of the gaggle are busy with camera phones while others have struck up animated conversations. There’s a lot of pointing going on and more than a few envious glances being shot my way.

We’ve gatecrashed a Britcar test day to grab a few laps of the Northamptonshire track during the lunch break, and before I’ve had a chance to sign the paperwork and pocket the keys we’re boxed in by race mechanics and drivers in multi-coloured overalls. I shouldn’t be surprised; supercars don’t come any more spectacular than Ferrari’s Enzo and Porsche’s Carrera GT.

In amongst the throng, I spot the familiar face of former Lotus F1 driver Martin Donnelly peering though the curved drivers’ window of the Enzo. ‘I could get myself into a lot of trouble with that!’ he says, chuckling impishly. Like most of those milling around, Martin has barely glanced at the Porsche. Despite the CGT’s retina-burning, saturated yellow paintwork, nothing turns heads like an Enzo.

The Ferrari’s angular lines and paper-fold creases look like the work of an origami expert rather than Pininfarina, and the nose-to-tail drama is almost rude in the way it demands attention. The Porsche is comparatively polite, with the rounded curves of a pebble eroded by the ocean, yet viewed in isolation it too is stunning. Its aggressive stance is emphasised by the oh-so-low centre of gravity, while the deeply curved doors give the whole shape a tautness that suggests skin stretched over muscle.

Stare at this pair for long enough and eventually you get past the wow-factor and notice that neither design is perfectly cohesive from every angle. The flat-backed CGT has a strange profile (admittedly improved by the removal of the roof), while the Enzo is a little nose-heavy and has so many edges they occasionally clash and jar with each other. Even so, you are left in no doubt that both machines are supercars of the highest order.

The racers break for lunch and a marshal wanders over to let me know that for the next 45 minutes the track’s all mine. Which to choose first? I’m more familiar with the CGT, having driven one to 201mph on a German autobahn (issue 080), and with the Ferrari still working its static magic there are fewer people to shoo aside before I can climb aboard the Porsche.

Its door opens conventionally, though it’s at least three times thicker than any conventional sports-car door. Drop into the seat and everything looks surprisingly straightforward, with overlapping analogue dials, a manual six-speed gearchange and a plain, switchgear-free steering wheel. It even starts with a twist of the key. That doesn’t mean to say it’s not without its fair share of exotic materials and exceptional craftsmanship – there’s true quality here, with attention to detail that’s second to none.

The footwells and sills reveal the carbon construction, while the floor-hinged pedals rise up like alloy sculptures. The gearknob is barely a handspan to the right of the wheel, ensuring you drive one-handed for the minimum time necessary, while its birch top makes a nod to the balsa-wood items fitted to the Le Mans-winning 917s.

Twist the regular Porsche key and the mighty 5.7-litre, 68-degree V10 catches instantly, with the purest, cleanest note you’ll ever hear from a supercar. Every bit as sensational is the throttle response, as sharp as anything you’ll find in top-level motorsport, the seemingly inertia-free revs flaring and falling as if connected to a switch.

The grabby ceramic-composite clutch isn’t the easiest thing to balance. In fact the best way to move off is to leave the throttle alone until your left foot has finished feeding it in. From then on, though, it’s no trouble at all and each gear slots home with a beautifully connected, mechanical feel. It may not be as fast as the latest paddleshift systems, but the speed and accuracy it can achieve is far more rewarding. Nailing a heel-and-toe downshift is pure joy, particularly as the brakes are solid underfoot, with instant, feelsome bite right at the top of the pedal’s travel.

Out on the track, the tyres take a whole lap to warm up, and until they do you’d better watch out – the Carrera GT slides with no warning and at relatively slow speeds. Even when the tyres have some warmth in them it’s still not a car that suffers fools. Understeer is off the menu, but you won’t be wanting extra helpings of oversteer either, so you gradually build up the pace, feeling out the limits. This is not a car you take by the scruff of the neck; it’s a challenge you approach with a flicker of hesitation, your instinct for self-preservation telling you that you’re treading a very narrow line.

Overcome these thoughts and adrenalin builds fast. Driving the CGT hard is as much a cerebral challenge as it is a physical one, but with a few laps under your belt you begin to realise that you can sense that fine limit and ride it, driving on instinct, revelling in the efficiency of every perfectly matched component. The wailing yowl of the V10 in full cry as it kicks towards 8000rpm prickles your nape, and getting everything from the car over a lap gives you all-over goosebumps. It’s engaging. No, scrap that, it’s totally absorbing – to drive the Carrera GT hard is to shut out the rest of the world. It’s just you and the car. What a buzz.

I park up feeling wired, but there’s no opportunity to calm down. Time is pressing and there’s an Enzo that needs to be driven. I slip my hand inside the small cut-out on the horizontal plane of the Ferrari’s driver’s door and pull it up, arcing it skywards. It reveals the carbon tub that’s set deep inside the bodywork, the effect making the Enzo look like it’s wearing a suit several sizes too big.

Inside, the dissimilarity to the Carrera is at least as marked as it is on the outside, and again the showy Italian totally upstages the conservative German. The Porsche may have motorsport overtones in the way it moves, but the Enzo has the cockpit of an LMP car – you can even see the steering column through the gaps in the dash – and once you’ve slammed the door back down you feel cocooned.

Turn the key, press the fob-mounted immobiliser and prod the big red starter button in the middle of the centre console. Whaaaap! The noise level verges on the ridiculous. This particular car wears a barely silenced Tubi Style exhaust system and is (un)comfortably louder than any of the Britcar racers. So great is the wail of the 6-litre V12 that it echoes off the Rockingham oval’s banking. I wouldn’t be surprised if the whole of Corby can hear my every move. Certainly everyone at the track will be able to follow my progress – even those behind the double glazing in the office buildings. Thankfully it’s impossible to stall, for moving away requires nothing more than a flick of a right-hand finger to engage first gear followed by a squeeze of the throttle.

The Enzo doesn’t possess the CGT’s nervousness on cold rubber and it feels ready to be driven hard within a corner or two. The front end is nailed to the tarmac just like the Porsche’s, and while the Ferrari will still snap into oversteer there’s a window in which you can work. The roll angles are similarly small but it can be hustled that little bit more, slides caught and even intentionally created.

Don’t get me wrong, though – the Enzo is not an easy car to exploit either. But if the CGT is a highwire tightrope act, then the Enzo is a hike along Striding Edge. There’s more room for manoeuvre, but spend too long leaning over the precipice and you’re tempting fate. One step too far and the fall is unrecoverable.

The Ferrari’s steering has the same sharpness of response as the Porsche’s, but it lacks the level of detail in feel; with the Enzo you sense the limits more with your backside. The V12 engine is more responsive at lower revs but it also matches the top-end rush of the V10. It’s gloriously brutal, and in Race mode you get a thump in the back every time you flick the right-hand paddle and a new ratio hits home. Downshifts kick in so hard they can briefly jink the whole car sideways. Be in no doubt, this is a car that always feels alive underneath you.

Both, then, are brilliant drivers’ machines. Both are highly strung, challenging and totally involving. For all their visual differences, out on the track this disparate pair share similar handling characteristics and reward equally. The fact that in terms of lap times both of them would be seen off by a 458 Italia matters not a jot – these are demanding, hugely desirable, premier-league supercars.

Which would I take? If you’d asked me that question in 2004 I would have plumped for the cool, concentrated Porsche. I thought the Enzo’s crazy lines would date and age too quickly, but we’ve just proved that they are now more striking than ever. Combine that drama with the extra flexibility from the extra pair of cylinders and a chassis that affords more lateral movement and you’ve got a new winner.

A big, big thank you to Paul Bailey for letting us loose in his wonderful cars once again.