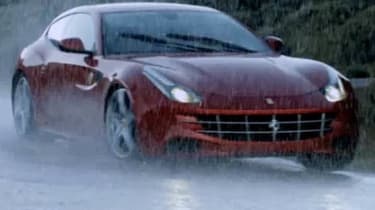 7
evo was recently given a guided tour around Ferrari's new FF supercar by Amedeo Felisa, Ferrari's CEO and the man responsible for its development. Here's what he told us.

evo: How did the new four-wheel-drive drivetrain come about?Felisa: We originally looked at this particular system ten years ago, when we were developing the current generation Maserati Quattroporte, but decided against using it in the end. But when we looked at what car we were going to replace the 612 with, we decided four-wheel drive would be an essential part of making the new car more useable.

Why have we never seen this system before?To be able to take the drive off the front of the engine [as is the case in the FF] and have the drivetrain in line with the front wheels, you need to have the engine positioned behind the front axle. Next, you need the technology to measure the grip at each wheel in real time, in order to calculative the maximum torque the wheels can transmit to the road. We developed this technology first on the 599XX and then introduced it on the 599 GTO, now we have it on the FF. We have patented this system, so it will be hard for others to follow our lead.

This front gearbox only has two forward speeds, why?In order to make it as light as possible, the hydraulic clutch overcomes the inevitable speed differential, so there is almost always some slip occurring. 'First' gear covers first and second gear in the main gearbox and 'second' covers third and fourth. Once you are traveling beyond 180km/h [112mph], the system reverts to rear-wheel drive only, as there should always be enough grip at the rear wheels to transmit full power. If there isn't, you're probably in the middle of an accident and four-wheel drive will not save you anyway!Will we see this four-wheel-drive system on other Ferraris?No, because the other cars in our range do not require it. The V8 cars do not have as much torque to transmit as our V12 cars, and cars like the 599 GTO are super sports cars, so being lightweight is more important than having four-wheel drive. Also, 80 per cent of our customers use their sports cars in dry conditions, or in high-grip conditions, so four-wheel-drive would add cost but not add to the driving experience.Did you ever consider fitting rear 'suicide' doors, to help access to the rear?We looked at it but again, it came down to an issue of weight. The rear seats are not going to be used for every journey, so why should we add more weight by adding such a door, for a situation that might only occur on less than a tenth of journeys?