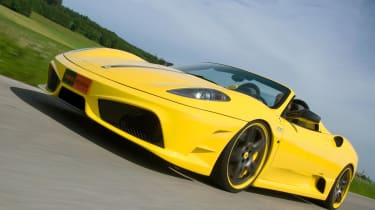 The Novitec 16M. A twin supercharged version of Ferrari’s already super-exclusive 16M, so the soft-top Scuderia now comes with 696bhp. Ferrari only built 499 in the first place, but the German tuning firm is ready and waiting for the hardcore few who want to add a 200bhp boost to the 4.3-litre V8.

Boosting a Ferrari engine isn’t for the faint of heart, yet Novitec has carved out a reputation for reliability as well as borderline insane power levels with its twin supercharged approach. One small Rotrex unit per bank of cylinders together with its own ECU effectively treats the car like two four-cylinder engines, which helps them cram the hardware into the limited space under that flat back panel, run a relatively low 0.48 bar of boost and keep the power curve on the same trajectory as the base car’s – albeit much higher up the chart.

The wheel-mounted shift lights didn’t even flicker for the first few kilometers, the Novitec feeling immense before it gets anywhere near its 8000rpm redline. But when you do summon up the courage that characteristic Ferrari runaway feel in the last 1000 revs is still present and correct, it just happens at a pace the brain can barely compute anymore. here’s a subtle hint of supercharger whine behind that flat-plane crank soundtrack, not that you can really take the time to appreciate it.

Stiffer suspension springs and lightweight wheels that probably shave just grammes off the package have pretty minor effects on the handling – the Scuderia remains a precision weapon that just keeps on gripping.

The Novitec’s nearest rival is probably the Lamborghini LP670-4 SV and this more compact package feels more manageable behind the wheel, even if it doesn’t have the blood-and-thunder appeal of the ultimate Murcielago.

At just shy of £40,000 for the conversion, the price isn’t too bad – and you get a new warranty from Novitec.