By the time you read this it'll be a year since the big Fiat rolled up outside Evo Towers. In 12 months I've clocked up 20,000 miles - and I've got a pile of bills to prove it, not including those for the Ferrari's daily diet of super-unleaded, but including its appetite for Pirelli rubber. Thankfully, nothing much has gone wrong. Until about a month ago... 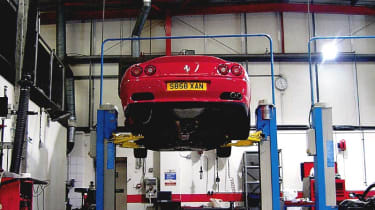 By the time you read this it'll be a year since the big Fiat rolled up outside Evo Towers. In 12 months I've clocked up 20,000 miles - and I've got a pile of bills to prove it, not including those for the Ferrari's daily diet of super-unleaded, but including its appetite for Pirelli rubber. Thankfully, nothing much has gone wrong. Until about a month ago...

I mentioned in a previous report that when you changed up from second to third the Ferrari had an occasional habit of crunching its way through the gears. It was as if you hadn't fully depressed the clutch rather than any synchro problems, and as it happened only occasionally I was expecting a relatively simple explanation when the car went in to Dick Lovett's for it to be checked out.

Two weeks later, the car was returned sporting a brand new gearbox. Ferrari had decided it was easier to replace the whole unit rather than spend time searching out the cause of 'Le Crunch'. As I'd purchased an official Power Train warranty when I bought the car (available for any Ferrari that's covered fewer than 56,000 miles) the scary £10,392 bill (£9870 for the gearbox, £522 for fitting) was sent to Ferrari's warranty department rather than me, thank goodness, confirming that buying the £2335.90 warranty was one of my better decisions last year.

It's still a shame that the 550 has blotted its copybook, because apart from this pretty major glitch the 550 has proved an easy companion to live with, nothing else has gone wrong, cold weather doesn't seem to faze it, and the Permaguard treatment applied in the summer has proved to be a terrific investment with the paintwork still sparkling as if it left the factory yesterday.

Meanwhile, driving the 550 daily continues to be an amazing experience, distinctly analogue in this increasingly digital world, granted, but none the worse for that. It's the 550's ability to cruise as well as hustle that I love the most, meaning that if you're prepared to pay the bills this really is an everyday Ferrari.

Totting up the costs of the last 12 months is a little sobering even so, as it seems I've managed to spend £6139.78 on servicing and tyres, although in fairness that did include £615 for the cambelt change that needs doing every three years and £145 for the Permaguard treatment. Annual depreciation probably accounts for another £6000 so, in all, the past year's motoring has cost around £12,139, ignoring fuel costs. Compare that with the £15,805 first year's depreciation on the BMW 645 that I ran before and it doesn't seem quite so bad.

What next year's costs will be is anyone's guess as we're about to enter uncharted Ferrari territory: by this time next year the 550 should have covered 55,000 miles and I've never seen a 50,000-mile 550. And what's it going to be worth with that sort of mileage? At least the shiny new gearbox should still be worth something...