Ferrari’s first supercar, the 365 GTB/4 'Daytona', was a 170mph GT that could cruise across continents. 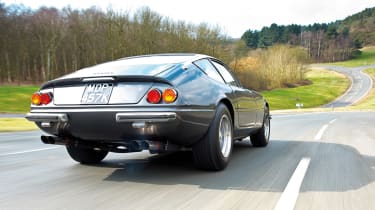 The Daytona was the fastest production car of its day, and not by a little but by a lot. Some tests put its top speed as high as 176mph and its 0-100mph time as low as 12.4sec. It had it all: dazzling speed, an impossibly long bonnet and monumental V12 power.

A counter to Lamborghini’s Miura, the Daytona is now widely viewed as Ferrari’s first supercar. In fact its official Ferrari name was 365 GTB/4 (it was dubbed Daytona by the press in honour of Ferrari’s 1-2-3 in the 1967 Daytona 24 Hours with the 330P4).

The car’s gifts to feeble, apprehensive flesh were profound and memorable: the dub-bass exhaust overlayed with quad-cam-drive shriek, the sharp metal clack of the open-gate gearchange, the rupture-weight clutch, the neck-bending acceleration. All of it was straight out of the supercar bumper annual. And all so achingly Italian.

Search for a classic Ferrari Daytona on evo Cars for Sale

True, the big front-engined GT was never just about straight-line performance. It promised to handle well for such a heavy car, partly because of the near equal front/rear weight distribution afforded by its five-speed transaxle. The cast alloy wheels, inspired by Ferrari’s F1 cars of the day, looked serious, too. They were centre-locked onto splined axles. But the unassisted worm-and-peg steering was very heavy. Getting the car to change direction at all was an act of willpower. And using the ample muscle of the engine to drift the tail wide bordered on the foolish. That’s why you’ll hardly ever see a picture of the Daytona being driven sideways.

It was best to get it pointing in the direction you wanted to go, then open the taps. Deep down, the Daytona felt well sorted, but it steered like a truck, and was almost as heavy. As a trans-continental cruiser it was crushing; as an all-round supercar it was hard work.