Ferrari finally accepted its fastest should be mid-engined. The 512BB was the result 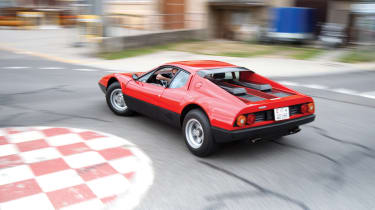 It’s a cast iron certainty that Enzo Ferrari didn’t like taking a lead from Ferruccio Lamborghini but the Miura was stealing his thunder and there had to be a response. It was called the Berlinetta Boxer.

A mid-engined senior league supercar certainly wasn’t a leap in the dark for Ferrari. It had its experience with the Dino to draw on and, of course, a wealth of know-how in F1 and sportscar racing.

Although lacking the sensual beauty of the Miura, Pininfarina designed a pretty and expertly proportioned body for the 365 Boxer, helped by the fact that although its 4.4-litre engine had 12 cylinders, they were in a flattened V with the opposing banks of cylinders set at a 180-degree angle rather than the more usual 90-degree configuration. This allowed a relatively low engine deck, despite the fact the ‘flat’-12 sat above  the five-speed transmission.

The motor itself was clearly derived from the 3-litre powerplants used so successfully in the 312 B and B2 Grand Prix cars raced by the Scuderia between 1970 and ’74. With four triple-choke downdraught Weber carburettors, it developed 360bhp at 7500rpm, enough to give the 1500-kilo BB a top speed of 176mph. The Bosch K-Jetronic fuel-injected BB512i introduced in 1981 was slightly quicker but even more driveable with, for the day, extraordinary engine flexibility. (Confusingly, 512 referred to the 5-litre flat-12 engine, when 365 came from the swept volume of one cylinder.)

The Boxer was a lovely thing to behold – a wonderfully understated counterpoint to the stylistic braggadocio of its rival, the Lamborghini Countach. It had a classic cabin, too. And a fabulously smooth engine with a broad powerband. But as a steer it was let down by a chassis that never really felt planted and was prone to serious lift-off oversteer. Dynamically, it was no match for the Countach.